On December 4th, you can access the snowboarding mini game by taking the southeast exit of Ymir. 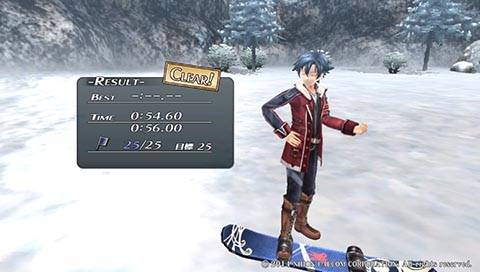 The Snowboarding mini game is available on Ymir on December 4th. The objective is to reach the goal line while meeting the targets listed on the right side of the screen. If you cleared the course for the first time, you will receive some cool prizes. 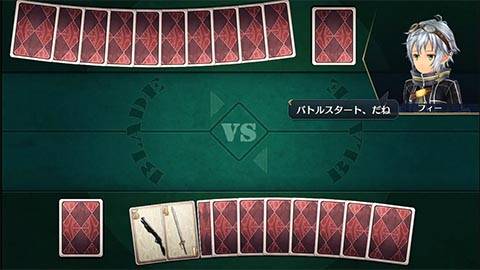 A returning mini game from Trails of Cold Steel. In this game, you and your opponent both carry a deck of cards. During your turn, you need to surpass your opponent number by picking one of your cards. If you cannot surpass your opponent's deck, you will lose. If both you and the computer end with a tie, the cards will reset and will pick up a card from the deck to put a fresh start. This game can either end with you running out of cards, or the player doesn't have the right cards to surpass the opponent's number. The center of the screen will display the power of each player with the numbers. This game is quite similar to Blackjack with you against the dealer in a different form. There are also other types of cards that don't follow the normal rules. You cannot win with a special card remaining.

Playing the Blade mini game will give you a 100 Link EXP between you and your opponent (Note: Only the first five opponents will give you Link EXP.).

The final game of Blade you can play is on December 30th. Playing on that day will give you 800 Link EXP and can be one of the prerequisites for triggering the Bonding event trophy.