Pick your party members. If you have been fishing, your rank should be promoted by now, which lets you can get a new fishing rod from Annabelle at the general store.

Make your preparation and leave through Ymir Canyon. Select two members from Class VII and one guest character (Claire, Sharon or Toval) to bring with you. You won't have the option to select your party member after the decision is set. This is the only part of the game that you can use Sharon, so if you don't bring Sharon with you, then you will miss the opportunity to use her until you start another playthrough. A suggested party would be Alisa and Sharon because Sharon has some very powerful crafts, and you can use Alisa as a CP battery which makes the duo a very strong pair. If you want the special accessory from Toval or Claire, then skip using Sharon, because you will need link EXP at level 3 to get bonus accessory for later. 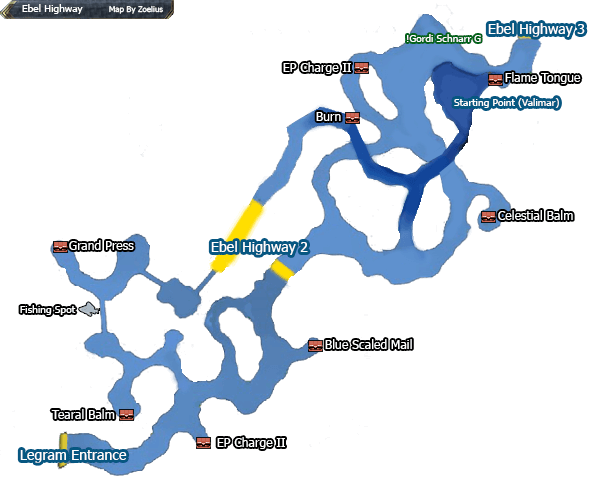 You will end up at Ebel Highway 2. Pick up the Flame Tongue quartz near Valimar. Then head directly to Legram by going south. The game won't let you go fully explore Ebel Highway yet, so pick up the rest of the treasure chest for later. 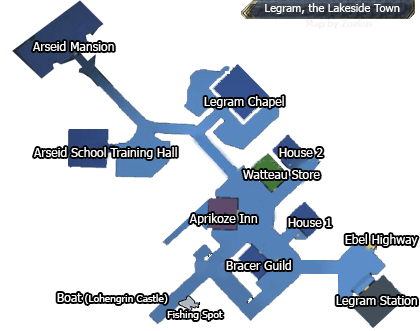 Watch the event scene at the Bracer Guild. Then go to Aprikoze Inn and speak to Weiber behind the counter, he will give you a copy of Gambler Jack II - Chapter 6. Then take the backdoor to outside and speak to Old Man Bem, he will teach you the Seafood Pilaf recipe. Head to the general store and purchase Gambler Jack Reprint #4, and stock up on new equipment. You could also find some of the Thors Academy students in Legram, there is Vivi at the Church, and Casper at the Training School. If you go to the harbor, you can find a fishing spot near Klaus. When you are ready, speak to Klaus, this will take you Lohengrin Castle. Climb up the hill and go inside Lohengrin Castle, you will fight a boss shortly after.

Afterwards, Laura and Emma will join your party. Now head to the Bracer Guild located at the southeast area of town. Speak to Miles, he will hand you some side quests.

After you have finished the two side quest above, go back to Ebel Highway. Then take the north exit to Ebel Highway 2. You can even examine Valimar for a short event. Anyways when you are ready, go to the northeast exit you will end up in Ebel Highway 3. 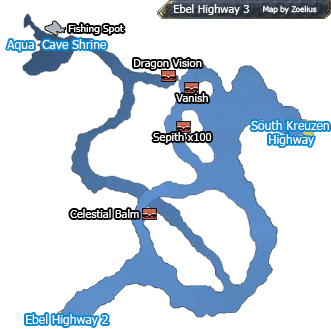 When you reach to Ebel Highway 3, you should head for the northwest exit of the map, it will take you Aqua Shrine. Clearing the Aqua Shrine will give you three extra AP. There is also a fishing spot near the waterfall by the Aqua Shrine.

Head downstairs, open the gate to enter the Aqua Shrine. Follow the west path until you reach to the northwest corner, you will find a switch. Press it to lower the water level. Then follow the west path. Go all the way to the east end to find a Trial Chest for Laura and Emma. Defeat the Trial Chest Boss and move on.

Follow the south path, when you see a pair of stairs, take the north one path, you will find a monster chest at the center of the map. A Scent quartz is found inside. Now backtrack and go to the stairs at the south end, you will find a pair of Blue Scaled Shoes in a treasure box. Then follow all the way to the west side of the map to see a treasure chest and a switch. Open the chest to find an EP Charge II, then push the switch to raise the water up. Now take the path at the center, it should take to the northwest area to the boss.

After you have defeated the boss, take the portal to exit out of Aqua Shrine. Collect all the treasure chest in Ebel Highway 3 if you haven't yet. Then take the northeast exit to South Kreuzen Highway. 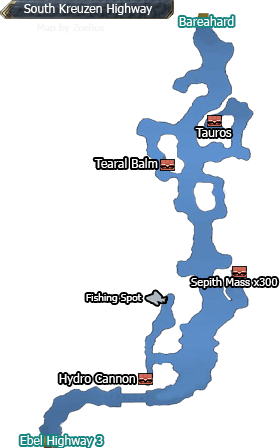 Keep moving until you reach the bridge for a short scene. Then head to the northwest corner to find a fishing spot and a Hydro Cannon quartz on the opposite end. Then continue north, and at the northeast corner, you will find some Sepith Mass in a treasure chest. Then go to the north region of the map, when the path split, you can find a Tearal Balm on the west side, and a Tauros Master Quartz in the monster chest on the east side. Then return to the center path, and take the north exit to Bareahard.

Going to Bareahard will automatically advance the story, so make sure you have finished all the side quests from Legram before you enter. 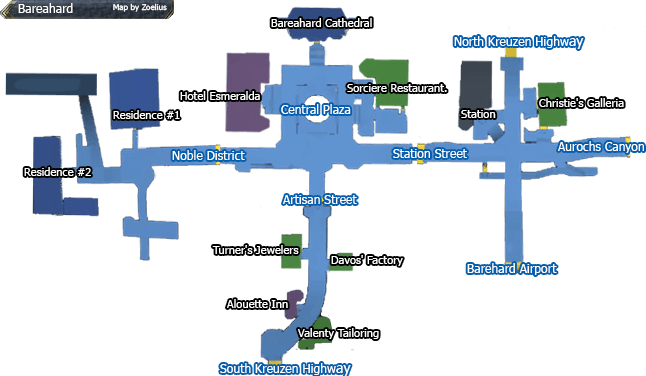 There is a list of things for you to do in Bareahard, you should head to the clothing store (Valenty Tailoring on Artisan's Street), purchase the Patterned Shirt and the Leather Sandal equipment from there. The Patterned Shirt has the highest evasion bonus in the game (20%), which is the best equipment for players that want to make a dodge tank type character for later (Fie and Sharon can easily hit a 100% dodge rate with these making them immune to physical attacks for end game.) The Leather Sandal has a very high speed rating at this point of the game.

Then go inside Turner's Jewelers (Northwest building on Artisan's Street) and speak to Colette. Leave, the building and take the north exit to the Central Plaza. Go inside the Sorciere Restaurant at the northeast corner. Then speak to Calmin by the northwest counter, he will teach you the Fluffy Pancake recipe. Exit out of the restaurant and take the east exit to Station Street. Speak to the maid, Saffron near Christie's Galleria, she will give you a copy of Gambler Jack II - Chapter 7. Then go inside Christie's Galleria and go to the second floor to the bookstore (Fortnum Books) and purchase the Gambler Jack Reprint #5, 6. Then speak to Theresia by the bench. Then work on the hidden side quest listed below.

After you have finished the side quests, go to the Noble District and walk near the entrance of Duke Albarea Mansion for a short scene. After this visit the Central Plaza and go inside Sorciere Restaurant and speak to Hammond by the counter. Then head to Station Street and take the south exit to Bareahard Airport. Doing this will advance the story, so make sure you have finished all side activities from earlier.

Head inside the airship located on the south. Go downstairs from the southwest end of the map to the Hangar room, you will find a Freeze Quartz.

Return to the main floor, and take the stairs on your right to the 3F. Open the door directly in front of you to enter the Lounge room. Afterwards, you will play the racing mini game. 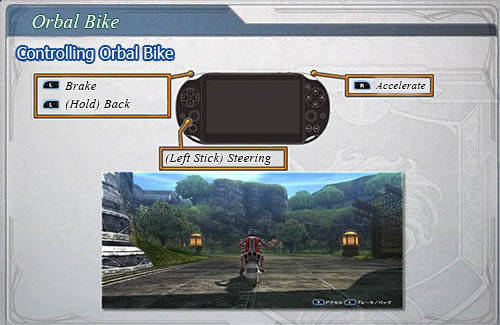 Beating Jusis on the race will give you 2 AP. If you lose, you can retry again to get the bonus AP as long as you don't give up.

Afterwards you will face another boss battle. If you manage to defeat Duvalie, you will get 3 Extra AP.

If you manage to defeat Duvalie, you will get an alternative scene. Follow with a mech battle.

The game will prompt you to save. Watch the event scene, until Rean is at the hot spring. You are given the choice to pick someone, select that person to have a special event and 600 Link Exp.

This is the only day in the game where you have double bonding events for certain characters. For this reason, you are given 7 bonding points.

Attend the bonding events, doing Alisa, Emma, Fie, Laura, Millium and Sharon's event will add a page to their profiles. Attending Gaius' bonding event will teach him the Hunter Wing ability instead of reaching to level 75. There is also a new difficulty level added to the snowboard mini game. Clearing the course will get you the Passionate Leggings accessory and a new snowboard. If you decide to head out to Ymir Canyon, there is a monster called Icicle Penguin added to the area, so scan that monster if want the battle trophy. Then go to Inn & Pub and speak to Gerald behind the counter, this will start a hidden quest.

Note 1: Guest characters (Claire, Sharon, Toval) with the highest link EXP (Must be Link Level 3) at the end of this act will give you a powerful accessory for Chapter 2.

Note 2: If this is your second playthrough or higher, you can exchange for a Zemurian Ore Shard (Material to forge the strongest weapon) at the general store at the price of 50 U-Materials.

When you have finished all the activities listed above. Save your game and head to your room to end the day. The game will accumulate all the AP you have earned, you will get a S-Rank if you manage to get a total of 41 AP.

After the event scene, you will be facing a boss battle, if you manage to reduce the boss' HP below 50% within 40 turns, you will get 3 AP.

After that, you will be facing another mech battle. however, this battle is unwinnable. After this fight, the chapter will end.