Leave town through Ymir Canyon. Select two members from Class VII, and one guest character (Claire or Toval) to bring with you. You won't have the option to select your party member after the decision is set, so make sure you chose your ideal team. 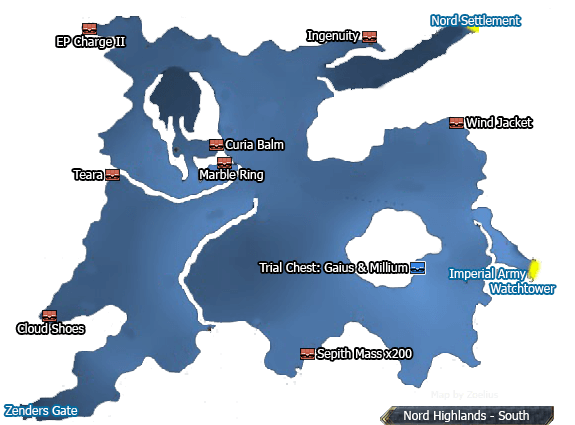 After the event scene, your party will be warp to the northwest area of Nord Highlands - South. Because Nord Highlands is a really big area, use the map above as a reference of all the treasure chest. When you reach the middle section an event scene will occur, go southwest to Zender Gate. Watch the event, you will receive a horse to ride on.

Go back inside Zender Gate and speak to Marx at the Mess Hall, he will teach you the Potato Croquette recipe and purchase new weapons from Zender Gate, but not armor because there is stronger equipment in the upcoming area (Lake Lacrima). You can also find some of your classmates here, there is Beryl at the Mess Hall and Mint who is just outside of Zender Gate. Now leave Zender Gate, the game won't let you access the southeast area yet, so wait for later if you intend on picking up the treasure chests. Now go to the Nord Settlement located at the northeast end of the map. A boss battle will ensue afterwards.

After the event scene, Gaius will join your party. Head to Elder's House and speak to Old Lady Jedah, she will teach you the Hot Milk Tea recipe. Then go to the Doctor's House, and speak to San the girl right next to Dr. Amr, she will give you a copy of Gambler Jack II - Chapter 3. Now also, purchase a copy of Gambler Jack Reprint #3 at the general store. You can also fish on the pier near the boat. When you all finish to go, leave Lake Lacrima to Nord Highlands - North.

You need to go to Nord Highlands - Northeast, that is located by the southeast exit. Gaius will prevent you from exploring the south region of the map, so just go directly to your destination. 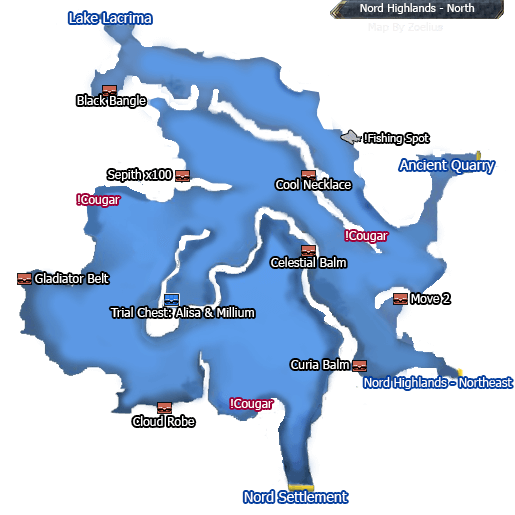 Go east all the way to the end, when the path change direction, head to the south corner to find a Floral Bottle in a treasure chest and then continue on north. An event scene and a boss battle will occur.

After the event scene, your party will be back in Lake Lacrima. The game will add the option to let you instantly travel to other parts of the Nord Highlands when you're outside on the navigation menu. There will be a bunch of side activities you can do, first go to the Elder's House and speak to the elder, he will give you a list of side quests. You can also explore some parts of the Nord Highlands that the game prevented you from going to earlier, allowing you to pick up some of the treasure chests that you were missing. When you are exploring the Nord Highlands - North, you should also open the Trial Chest located at the center of the map, doing so will unlock the Overdrive function for Alisa & Millium. After this, you should work on the side quests.

Return back to the Nord Highlands - Northeast, and explore Aria Shrine located at the northwest exit. Clearing it will give you 3 AP.

Note: There is a fishing spot near the entrance to Aria Shrine.

Head downstairs, and open the gate to enter Aria Shrine. then follow the path northwest, you will find a Trial Chest for Alisa and Gaius.

After you have cleared the Trial Chest, climb up the ladder that is behind you. Then go to the southwest path, if you reach to the very corner, you will find the Aerial quartz in a treasure chest. Then go back to the center area and take the ladder down. Go north to the center, you will notice three switches, press the switch on the west side, it will lower the platform. Then go to the west end to find a Sleep Quartz. Run back and flip the same switch again to raise the platform. Then go to the center, and pick up the treasure chest on the north, which contains an EP Charge II. Then flip the switch to raise the platform. Then go to the east side, press the switch to lower the platform, now climb up the ladder in front of you. Then go all the way west, open the chest to find some Sepith Mass, then go southwest to find the Criminal Master Quartz in a Monster Chest. Then head all the way to the north end, use the Orbment Charging Station and then open the gate to fight the boss.

Head to the Nord Highlands - South, and then go to Zender Gates. Then speak to Officer Zats or Manning near the store area. Accept their offer to start a hidden quest. Then speak to Officer Orgum by the group officers, he will give you a copy of Gambler Jack II - Chapter 4. Explore the southern part of Nord Highlands and pick up whatever treasure chest you have missed including the Trial Chest at the southeast area of the map.

If you have finished all of the activities listed above, you should continue on with the main story. Head to Nord Highlands - South and head to the southeast corner of the map. The location should be marked with a red exclamation mark on the map. Millium will put a ladder out for you, climb up the ladder and move to the end, select the first choice when you are all ready. 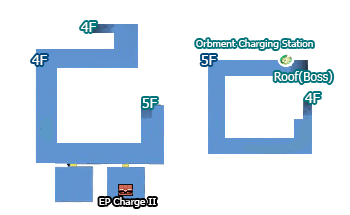 As soon as you enter the tower, you will be fighting some Alliance Forces Soldiers, these guys can hit a little hard but they are weak against status ailments. Hit them with a craft skill that causes Seal and they'll be useless.

After you have defeated the soldiers, use the Orbment Charging Station in front of you to fully recover. Then head to the southeast path to find Wind Shoes in a treasure chest. Return back to the starting area and go to the north path. Go all the way to the end, examine the duct, and go to the end to find a La Forte quartz. Return back the previous area, and take the stairs up. Then go to the room on the northwest side of the map, open the treasure to get some Sepith, then take the southeast path to go upstairs. Then as you try to go north, a group of mercenaries will come after you. Defeat them and move on. You can examine the ducts at the northeast corner, going to end, you will find an Attack 2 quartz. Return to the previous area and then take the stairs up. Go south, and there is an EP Charge II on the southeast room Then take the northeast path to the end, you will be surrounded by another group of mercenaries. Defeat them and head to the northeast end, you will find an Orbment Charging Station. Heal, save and then head outside. Defeating the upcoming boss before 40 turns will also give you bonus AP.

When you're ready, go to the rooftop to fight the boss.

Once you have control over Rean, Go to the general store and speak Camilla to accept the hidden quest. Then speak to her again, purchase the Onion Soup recipe and a copy of Imperial Chronicle Issue #3. Then enter the house located southeast right beside the pub. Speak to Masha by the kitchen, she will give you a copy of Gambler Jack II - Chapter 5. There is also a new difficulty level added to the Snowboard mini game. Complete it to receive the Hare quartz.

Then speak to Claire southeast of the Baron's Mansion. This will add a page to her profile. Then attend the bonding events, doing Sharon and Toval's bonding event will add a page to their profiles. Then finish the hidden quest. If you decide to head out to Ymir Canyon, there is a monster called Snow Rat added to the area, so scan that monster if want the battle trophy.

Once you have finished all the activities listed above. Return to your room to end part 2. The game will then accumulate all the AP you have earned throughout the chapter. You will get a S-Rank if you manage to get a total of 35 AP.