The fourth Legion is formerly Alicia's, the Pupper Legion, which you will recover about two-thirds of the way through File 05. It is unique in that it's normally ground-bound. All other Legions float normally, but the Beast Legion walks on the ground, so it can't help you Chain Jump across gaps. That said, it can totally get airborne if you aim it at a floating enemy. It attacks with spins, slashes, dashes, and sometimes a mouth cannon. While it's the second slowest-moving Legion and only has average power, it has a lot of utility abilities that can make it helpful. 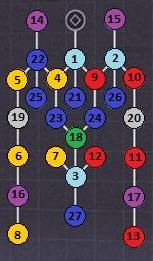