The final Legion in the game is Max's, found at the end of File 08. It is by far the slowest and most powerful of the Legions, wielding a large weapon that's a cross between an axe and a greatsword. Slow attacks but lots of power, and it comes equipped with its own shield that prevents damage for a time. The shield encases the Legion, but you're certainly allowed to get in there yourself if you need the protection. Furthermore, its standard attacks sometimes leave behind small blue crystal explosives that can cause enemies additional damage when they go off. 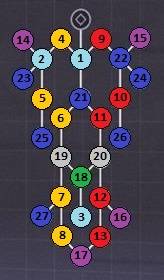