The third Legion, formerly Jin's, is earned most of the way through File 04. This sucker doesn't need weapons when it's got those massive punchy fists. Well, okay it does have gun mountings that it will use every once in a while, either to shoot finger bullets or fiery blasts. While it's the third-fastest Legion, it's only slightly slower than the Sword Legion. It also has some neat extra combo options with its Special Action, and using it to throw stuff can be quite damaging to the bad guys. 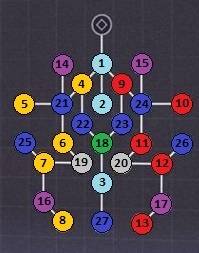