What do you need help on? Cancel X
Prev
Close X Guide and Walkthrough
by Mogg 13-42
Table of Contents

Guide and Walkthrough by Mogg 13-42 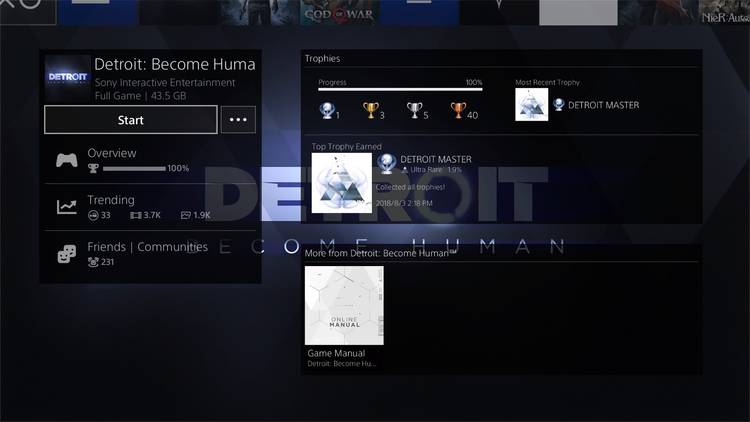 This section will provide detailed information on how to unlock every trophy in the game. Including step-by-step instructions to help with the more complicated trophies.

Obtain all the other trophies in the game

Complete The Hostage. Unlocks regardless of whether the mission succeeds or fails.

Connor successfully rescues Emma from Daniel in The Hostage.

During the chapter A New Home, Kara must build a WARM or TRUSTED relationship with Alice to get the key to the girl's secret box. Open the box in Alice's room and look at the contents inside it.

Connor must find Carlos' Ortiz's android in the attic during Partners.

We Are Free (Bronze)

Kara and Alice must survive and successfully escape Todd's violence in Stormy Night. It doesn't matter whether Todd lives or dies.

Markus must choose to Push Leo after becoming deviant in Broken.

Markus must choose to Endure Leo's assault after becoming deviant in Broken.

Connor must successfully extract a confession from Carlos' Ortiz's android during The Interrogation.

Kara and Alice stayed in the Squat or the Motel in Fugitives.

Connor must scan all the items and read the news reports on the lieutenant's desk, while waiting for the man to arrive during the chapter Waiting for Hank.

Kara and Alice must successfully evade the police during On the Run. Doesn't matter if you were chased by Connor on the highway or successfully reached the train station undetected, as long as the girls manage to escape alive.

Connor must chase Rupert instead of helping Hank near the end of The Nest.

Connor must help Hank instead of chasing Rupert near the end of The Nest.

Kara and Alice must successfully escape from Zlatko's mansion alive during the chapter Zlatko.

Connor must shoot the Tracis during the chapter The Eden Club.

Connor must spare the Tracis during the chapter The Eden Club.

Connor's overall relationship with Hank must be Hostile so that the lieutenant shoots him in The Bridge.

A Smile On Her Face (Bronze)

Give Alice a ride on the carousel near the end of the chapter Pirates Cove.

When A Plan Comes Together (Bronze)

Markus, North, Josh and Simon must jump off the rooftop together during the chapter Statford Tower.

A Glimpse Of Jericho (Bronze)

Connor must find Simon on the rooftop of Stratford Tower during Public Enemy, then leave cover to charge at Simon and complete the QTE.

Markus must conduct a pacifist riot during the second half of the Capitol Park chapter.

Markus must conduct a violent riot during the second half of the Capitol Park chapter.

Nothing To See Here (Bronze)

Kara must successfully fool the police officer so he leaves without incident in Midnight Train.

Markus must choose to attack the police in Freedom March.

Markus must choose to stand his ground against the police in Freedom March.

Connor must choose to shoot Chloe during the chapter Meet Kamski.

Connor must choose to spare Chloe during the chapter Meet Kamski.

Connor must find Jericho's location using the evidence in the police station's archives during the chapter Last Chance, Connor.

Kara, Markus and Connor must be alive by the time you reach Crossroads.

Successfully blow up Jericho in Crossroads either as Markus or Deviant Connor.

Markus must choose to lead a Revolution in Night of the Soul then successfully liberate the android camps in Battle for Detroit.

Markus must choose to lead a Demonstration in Night of the Soul then hold out to the end, until the army is ordered to stand down in Battle for Detroit.

Kara and Alice must be captured by soldiers during Crossroads or the early points of Battle for Detroit. Then both of them must escape from the recycling camp together. It is best to do this alongside Markus' revolution, as Kara and Alice will be freed as well when Markus liberates the android camps.

Kara and Alice must safely cross the border into Canada during Battle for Detroit.

An Army Of Me (Bronze)

Deviant Connor must successfully convert the androids in the warehouse of Cyberlife Tower during Battle for Detroit.

Machine Connor must kill either Markus or North near the end of Battle for Detroit.

My Turn To Decide (Bronze)

Deviant Connor must reach and activate the magic stone inside his mind palace during Markus' victory speech in Battle for Detroit.

Connor must decide to remain a machine in Crossroads and try to track down either Markus or North inside Jericho.

One Of Us (Bronze)

Connor must choose to become deviant in Crossroads and escape the ship with Jericho's people.

Don't lose any fight before reaching the end. Or do not fail a QTE sequence until the end of the game. It is however okay to miss a button or two during a QTE, and it is recommended to change the difficulty to casual to simplify the button sequence. You are also allowed to restart a chapter after failing a QTE. Here is a list of all the QTE sequences for the route I've taken. You can follow it in case the trophy does not pop for some reason.

Find all 46 magazines in the game. Check the magazines section for a complete guide.

Connor must maintain an overall FRIEND reputation with Hank throughout the game, and make sure the lieutenant survives until the end.

Kara, Alice and Luther must safely cross the border into Canada during Battle for Detroit.

I'll Be Back (Silver)

Connor died and returned at every opportunity before reaching the end. In total, Connor must die about 8 times and the trophy will pop after you complete Night of the Soul. It is recommended that you kill off Kara and Alice as well as Markus during this run to significantly shorten the game. You must also start from the beginning and not skip chapters with chapter select.

You also need Hank to be Hostile during this playthrough to unlock the trophy. The quickest way for this to happen is to have Connor threaten Hank then spill his drink the first time they meet in Partners.

This Is My Story (Gold)

This trophy unlocks the first time you complete the game.

These Are Our Stories (Gold)

Spend a total of 20,000 points buying unlockables from the Extras tab in the main menu.

Everyone is alive at the end. You must achieve the best ending for the game to unlock this trophy. The exact requirements are as follows: