What do you need help on? Cancel X
Prev Next
Close X Dead Ops Arcade II Guide
by MKillBill
Table of Contents

This section details all of the Silverback (SB) Challenges found in the game and how to beat them.

NOTE: Once you pass round 42, you may encounter a random Silverback Challenge at any time. It could be any of the challenges except Temple Fortress (one shot deal with Room of Fate immediately after.) 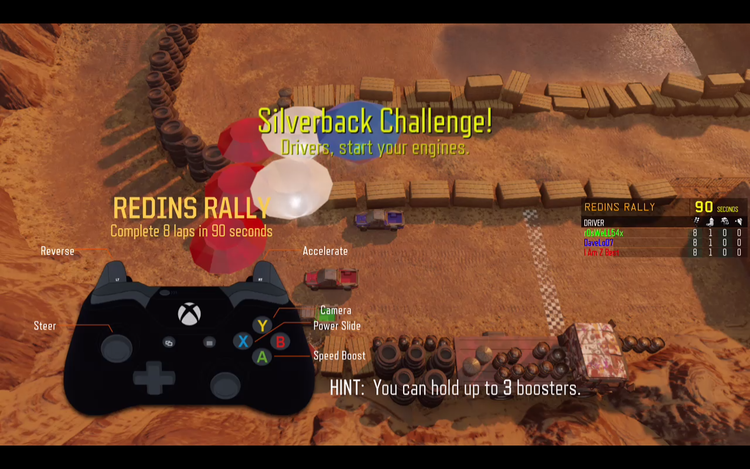 It's basically a throwback to Super Off-Road in the arcades, only you get to smash zombies in the process!

You first encounter this challenge in the Farm arena after round 11. The idea behind this game is to complete laps around the track within a given time limit. You might wonder what this has to do with killing zombies (I did when I first played this mini-game.) But fear not, there is a purpose. Once you complete the first lap, zombies will spawn and come after your monster truck. For each zombie you run down, you gain extra time on the clock. You can also gain time by simply completing laps. 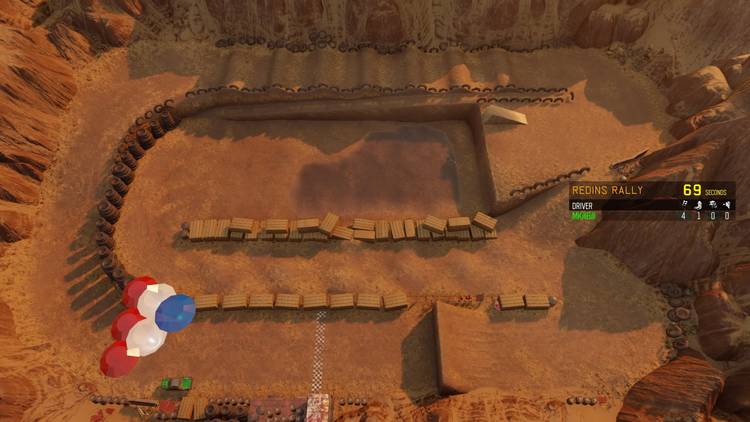 First, let's discuss the 4 icons next to the driver names, in order...

Study the track above. Memorize the tough spots and be ready to navigate around them when possible; especially that lake in the middle of the map. First things first, change your camera view to third person view behind the vehicle to make your life easier. Maintaining control of your vehicle is key to completing the race in first place, let alone completing the race at all. When you approach bumps on the track, ensure you are lined up straight continuing onward or you will end up hitting the wall and waste time realigning yourself. As far as nailing zombies goes, make it a point to run down 2-3 zombies per lap. This ensures you will have a boost or two for the tricky sections and one boost to go for the gems at the end of the lap. You earn +1 second as well as a turbo boost for each zombie killed.

You will also notice several jumps on the course. Take advantage of them by hitting your boost at the very peak of the jump while in mid-air to get maximum height and distance. This is especially important if you want to snag those monster gems that are dangling above the course. You should boost at the peak of the ramp (but not in the air) in order to get them. Continue doing this for 4-8 laps and you should be victorious.

Should you come in first place, you will earn yourself a random reward normally obtained through the Room of Judgement. It will be either a death machine with enhanced purple skull power or a pair of turbo boots and four (4) boosts for use in the next round only. Basically, a taste of what's to come after the Room of Judgement.....maybe..... 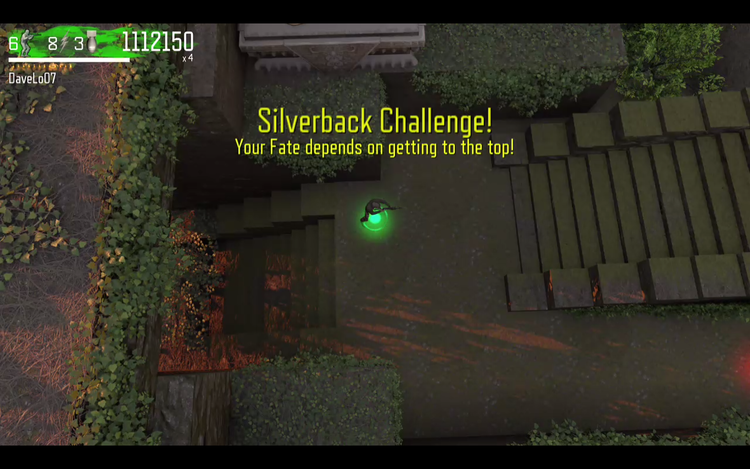 It's a race to the top of the spiral and your fate is on the line...

NOTE: At the start of the level (shown above) turn left and head down the steps underneath the cover. You will be rewarded with a secret stash of items that will prove useful in getting to the top much quicker (boxing gloves and saws.)

This challenge is only encountered once in the entire game (including 65+) and that is during the Temple Grounds arena after round 19. There's not much to this map. You must race to the top of the spiral mountain while avoiding and/or killing some deadly skeletons with swords. Be very cautious of the skeletons as they can drop down and climb up from different levels and catch you off guard.

If you are playing with a team, a smart play would be to have only one player (preferably the person with the least number of nukes) make the journey by themselves. The rest of the team can camp out below. This is important to consider because skeleton kills do not award any points and the extra lives at the top are awarded to ALL players rather than just the person who picks them up. There is little point in putting the team at risk when one player is more than capable of making the journey by themselves.

As you approach the top, you will see some item pickups such as extra lives, nukes, etc. Pick them up and then drop down the center of the mountain to end the level. See the screenshot below. 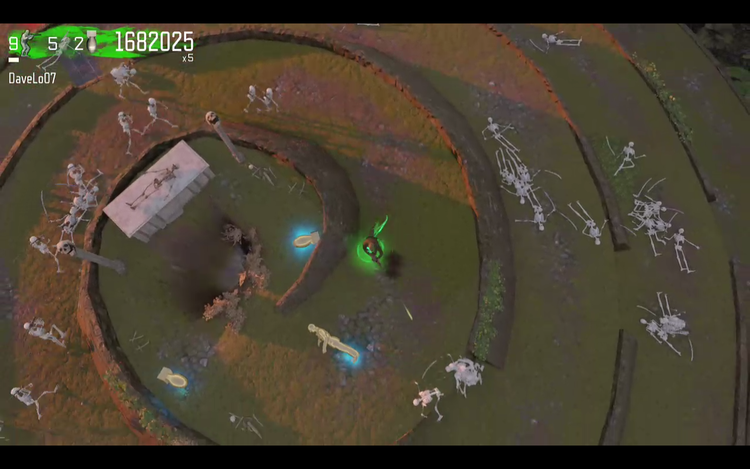 NOTE: There is a trick where you can boost yourself up the mountain and get through the level a little faster, but it requires using some speed boosts, is easy to mess up, and quite honestly unnecessary. The level is easy enough that you shouldn't need to waste armory to complete it. All the help you need is waiting for you at the start of the level and along the trail. In fact, I recommend AGAINST boosting on this challenge as you can easily shoot yourself off the side of the mountain by accident and make more work for yourself.

At the conclusion of the level, you will be thrust into the Room of Fate. You MUST win this SB Challenge to enter the ROF (because otherwise you would be out of lives and dead.) 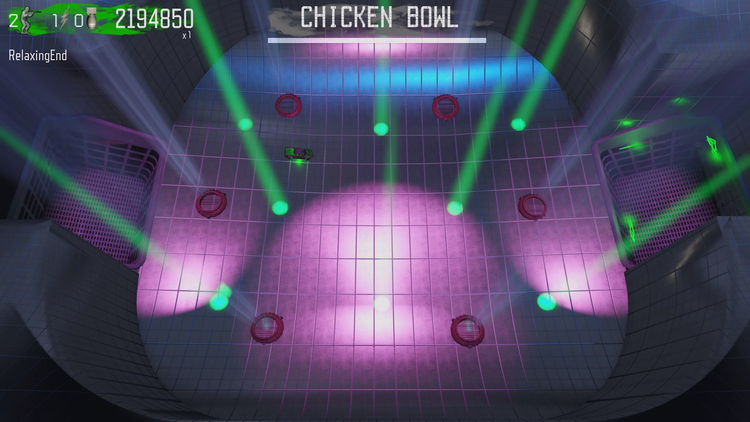 This challenge is first played during the Bloodpool arena, typically after round 26. This game is as simple as putting eggs in a basket. Literally. The idea of the game is to use your truck to push the eggs on the field into the basket at the opposite end of the playing field. Sounds easy, right? Well it is, except for the air pockets that mess with you and blow your car around. The circular grey discs on the ground will shoot your car into the air and completely ruin your hard work and planning. 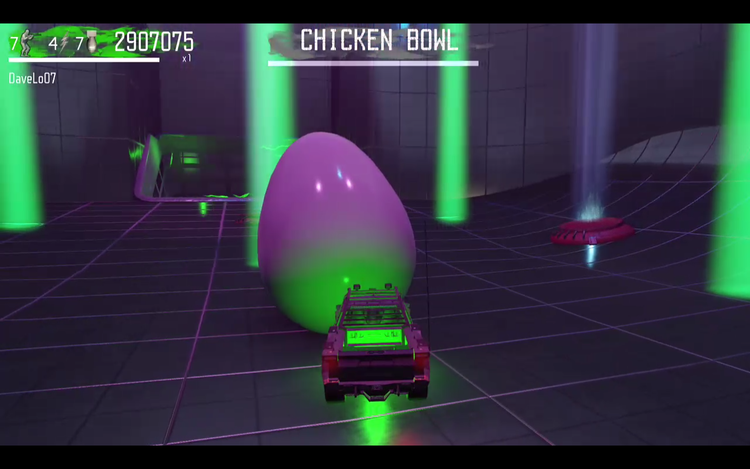 As with Redin's Rally, I personally recommend changing the camera view straight away to make your life a lot easier. Make the camera in 3rd person view behind your vehicle. Then, simply line up behind the egg and boost into it. If you need to make a quick turn due to a miscalculation, just power steer yourself in place or back up and try again.

NOTE: You must push the eggs into the basket of your color. Pushing one into the other basket will give the player no reward whatsoever. However, it could help out another player on your team if that is their designated basket...

Each egg you get in the basket earns you a gem which is immediately applied to your multiplier. The more eggs you bag, the more gems you earn. There is a required number of eggs you must place in the basket to win, but even if you reach that number you will not gain any additional rewards so it is pointless to worry about "winning" this challenge. 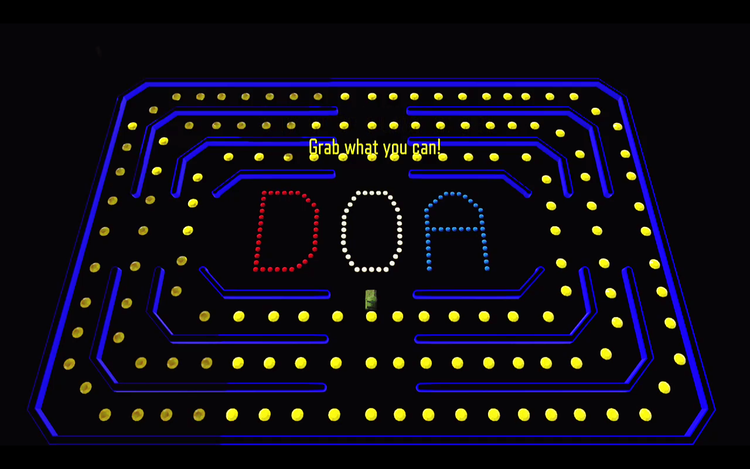 The final Silverback Challenge is first encountered during the Combine arena, usually after round 47. Imagine mixing two classic Atari games: Pac-Man and Combat. This is what you get.

The object is to move around the maze collecting the little Pac-Man pellets (gold) and gems, while avoiding and/or destroying the enemy Cerberi. Simple in concept and fun to play. Just pick up as much gold as you can. Definitely try to get as many of the gems in the middle that spell DOA. They will greatly increase your multiplier and help out with gaining lives in the long run (but if you've made it this far, you should already know that.)

So what's the challenge then? There are enemy Cerberi trying to shoot you down at the same time. Every shot they land on you takes away some of the gold you've acquired up to that point (don't worry, you can get it back.) At the same time, there is a time limit, so collect the goodies as fast as you can!

Gold and gems to boost your score and multiplier. Outside of that, nothing more than the satisfaction of thwarting the Silverback again.