What do you need help on? Cancel X
Prev Next
Close X Final Fantasy X Remaster Walkthrough
by bover_87
Table of Contents

After the scene, use the Save Sphere, then continue along the path to arrive in...

Follow the ruined road north. It will turn left; in this area, you can open a chest for a Fortune Sphere. Continue following the path north for a scene. Further along, you'll see a small area jutting out on your map; you'll find a Spiritual Targe (MP Stroll) in a chest. Keep working your way along and you'll arrive at a Save Sphere; use it, then enter the building.

All the enemies you'll find in this area are new. None of them can be Captured, so put away your Capture Weapons in favor of other effects. Also, both types of Fallen Monk have Candle of Life as a Common Steal and Purifying Salt as a Rare Steal; try to grab a few. Meanwhile, against Defender Z, keeping it Provoked is very smart, because it deals heavy damage otherwise (it functions very similarly to Defender X).

Inside, follow the very linear path. Just after the first covered section, the path slopes up. Look to the right of the path for a collapsed ceiling leading to the top of the enclosure, at the end of which is a chest with 10,000 Gil. Back on the lower level, keep following the path until you reach a Save Sphere. Use it, then press on. You'll soon reach a fork; the northeastern branch holds a Friend Sphere chest. Back at the split, head northwest. After rounding a corner you'll see a bridge of sorts made from a ruined girder. Cross it, then look carefully behind it for another similar-looking beam sloping downward. Follow it for a Lv. 3 Key Sphere, then return and follow the walkways into the next room.

Here, follow the path. To the right as you pass is a Luck Sphere, a very valuable Item that creates a rare Luck +4 Node on the Sphere Grid. At the end of the corridor, use the Save Point, then head down the stairs to enter the...

Zanarkand's Cloister of Trials is a little different than the others you've done so far. It involves looking at a screen and stepping on the corresponding shapes. A map of the shapes is listed in the link below; I recommend using this to help you navigate the puzzles here.

You begin in the smaller chamber. As you run forward, you'll trigger a floor panel, starting the first puzzle; simply step on the marked spot on all the shapes shown on the monitor (the square ones are always wrong so avoid them) for a scene, then push any of the pedestals (except the middle ones, which can't be moved) that are revealed.

The remainder of the Cloister proceeds very similarly. Head to the large room, and step on each of the blocks shown on the screen there (their orientation must also be correct), then, when the puzzle is solved, return to the small room and push another pedestal to get another puzzle. Once all four are solved, you need to figure out the two middle pedestals. Thankfully, we're down to good ol'-fashioned sphere-shuttling now. Grab the Kilika Sphere (red) from next to the monitor in the large room and place it on the left pedestal in the small room. Finally, take the Besaid Sphere (blue) and put it in the one on the right.

After the scene, equip your party with as much Berserk Ward/Berserkproof Armor as possible, then use the Save Sphere that just spawned. Head toward the center of the large room to fight yet another "guardian." 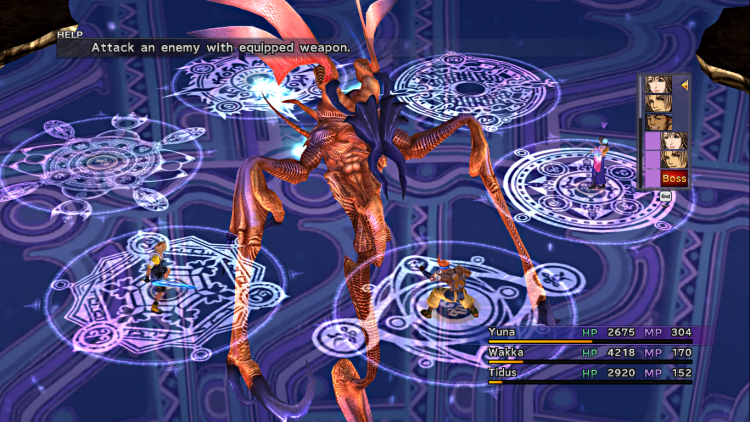 Spectral Keeper is a gimmick battle through and through. You fight from six different platforms surrounding Spectral Keeper; each platform can only be occupied by one character, and Moving (using the Trigger Command) costs that turn. Guard and Sentinel are also unavailable. Meanwhile, Spectral Keeper can only target the three platforms in front of it, and can turn anytime it takes a turn. With all this in mind, how do we go about this?

The fiend's bread-and-butter is Berserk Tail, which, as you might have guessed, inflicts damage and Berserk with 50% accuracy (Berserk Ward will block this, in addition to the obvious Berserkproof) against the three platforms in front of it (it will turn to face a character before doing this). Any physical damage will trigger a counterattack against the three platforms in front of Spectral Keeper. After being damaged four times, on its next turn, it will use Glyph Mine to set mines on two random platforms (which may or may not be occupied and may or may not be in front of it), which will then explode, instantly KO'ing anyone on them (ignoring resistance) when they get their turns. If an Aeon is Summoned, the boss will use basic physicals against it for three turns, then use Glyph Mine to trap the space under the Aeon, instantly killing it if it's not Dismissed or the boss killed before the platform gets a turn.

Except if Glyph Mines are active, it's best to ignore the platform gimmick and simply space out your party so that no two of them are on adjacent platforms. This way, only one party member will ever be affected. You'll then want to cast Protect and Hastega on all characters you intent to use. If you can get a party with full Berserk protection, this fight is a laugh; just whittle down Spectral Keeper's HP while keeping healed and moving if you need to evade a Glyph Mine. Alternatively, if someone with Provoke also has Berserk protection, just do that and it's practically over before it even started. Otherwise, be ready to remove Berserk from anyone afflicted and stay healed. Inflicting Mental Break status is also useful; it will make Lulu deal very heavy damage. Finally, you really want to get Overkill here, because getting an extra Lv. 4 Key Sphere is huge. If you can get the Aeon's Overdrive gauge full or Yuna with Grand Summon, Bahamut will probably deal enough damage to pick up the Overkill once the enemy is under 9,999 HP.

Once it expires, the boss will leave behind a Lv. 4 Key Sphere, (doubled if Overkilled as usual). Nice!

After the battle, use the nearby Save Sphere. Equip your party with Deathproof (Death Ward is not sufficient) if you have it, and also try to defend one of Darkness (for physical attackers), Silence (for mages), or Sleep (for Special users). You should not equip Zombie Ward or Zombieproof unless the character also has Deathproof, but if you can obtain this combo you are practically invincible in the upcoming fight.

Once you're ready, use the Save Sphere if needed, then follow the linear hallways, watching scenes as you go. (After the scene in the Great Hall, you may want to go back and save.)

Enter the room beyond (literally The Beyond) for a friendly discussion. 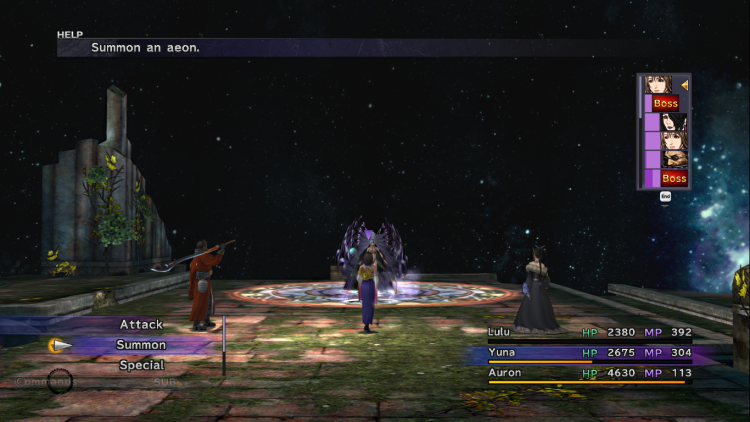 Yunalesca is fought in three phases. Each phase is a separate enemy, with its own stats and properties; however, the battle is continuous, so any status effects on the party will continue uninterrupted.

Her first phase is pretty basic. Yunalesca will use a physical attack that does little damage but removes all positive status effects except Reflect and Auto-Life, and Absorb on the party member with the highest current HP, which steals 50% of the character's maximum HP and transfers it to Yunalesca (inflicting Zombie on the target will reverse the effect). If targeted, she will counter physical attacks with Blind (sets Darkness), magical attacks with Silence (sets Silence), and Special attacks with Sleep (sets Sleep).

As you can see, the first portion is very simple. If you defended against status attacks as advised, you can simply knock down her HP while staying healed. Otherwise, you'll need to take your time, always being sure you can survive before eating counterattacks. Inflicting Zombie on the party member with the most HP can also help take the heat off. This is also a good time to Steal; Stamina Tablet is decent enough, and Farplane Wind is great. 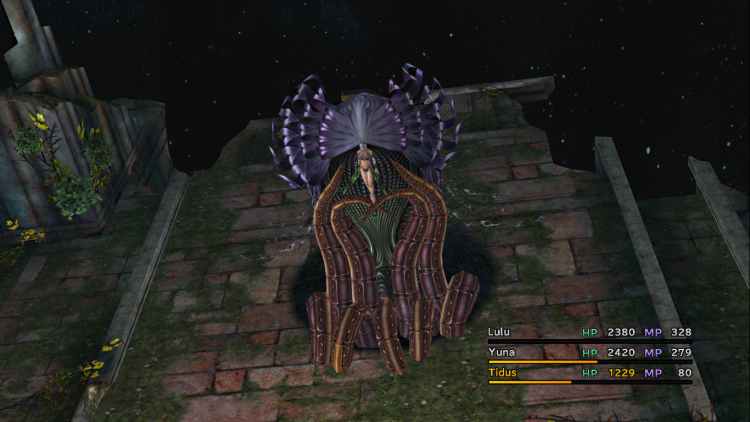 Phase 2 starts out with Hellbiter, which inflicts weak physical damage and Zombie on your party. From here on out, Yunalesca will spend most of her time casting Cura and Regen on your party. If you remove Zombie status from a character, she will regain the ability to use Hellbiter to reset it; the more party members not under Zombie, the more likely she is to use it, until all three party members are non-Zombies, at which point it's guaranteed. She still retains her basic physical which removes all positive status effects except Reflect and Auto-Life, now as a counterattack. If you Summon an Aeon, she will use Mind Blast to inflict damage and Curse on it every turn, preventing it from using Overdrives unless its gauge is full on its first turn.

During this phase, you'll probably want to remove Zombie from 1-2 characters to make defense easier. Be aware that you do not want to finish the phase with all party members not under Zombie unless you have Deathproof; you'll see why soon. Reflect is another option, though you will need to Dispel Yunalesca after a Reflected Regen. Otherwise, you just need to work on getting Yunalesca's HP to zero as usual. 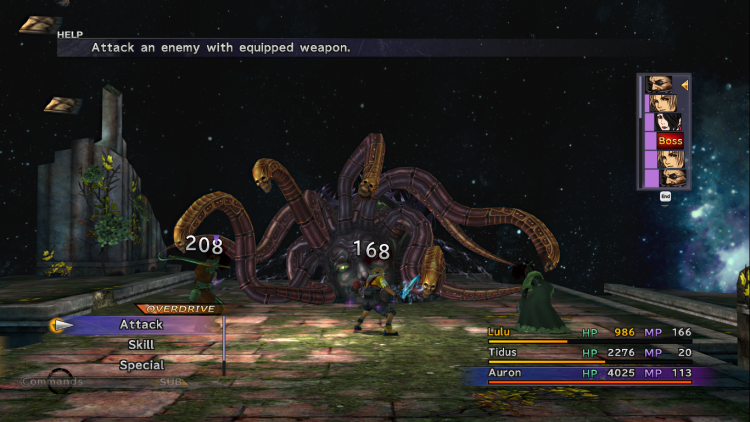 The third and final phase is a major doozy. Yunalesca starts the party with Mega Death, which always inflicts instant KO on the party unless they are Zombies or under Deathproof. Her attack pattern then goes Hellbiter (damage plus Zombie), Curaga or Regen (both on the party) for two turns, then Mind Blast (damage plus Confusion to the party), then Hellbiter/Curaga/Regen, after which she will repeat the cycle. Facing an Aeon, she will go Mind Blast (Curse), then Absorb, then Osmose (drains MP), then Absorb again.

Other than Mega Death, the big threat here is Mind Blast's Confusion. If you made it this far, you shouldn't have any problems dealing with her Zombie nonsense. Luckily, Yunalesca has a fixed turn order in this phase. Her fourth turn (counting the opening Mega Death) will be Mind Blast, allowing you to swap in an Aeon or characters with resistance to Confusion. The catch here is that Confusion protection is hard to come by at this point; Confuse Ward is almost only ever seen as random Armor drops most likely, and Confuseproof is almost certainly too resource-intensive for you to Customize. So long as you can avoid getting hit with Confusion, and don't die to Mega Death, there's nothing to fear here.

Once you prevail, you receive a Lv. 3 Key Sphere for disposing of the spinner of false hope, plus a random Zombie-related Weapon or Armor.

Once you're back in control, in The Beyond (where you fought Yunalesca) and look in the back of the area for the Sun Crest, needed to improve Tidus' Celestial Weapon. (You may need to use the "stairs to nowhere" in the room to trigger its appearance.)

(WARNING: If you're playing International or Remaster and don't get the Sun Crest before leaving, you will have to fight one of the strongest superbosses in the game in order to pick it up, severely hampering your progress in the postgame. Make absolutely sure to get this!)

Once you're ready, head back the way you came. Use the Save Sphere (you might consider saving to a new slot), then ride the elevator and exit the corridor to the Cloister of Trials for scenes.