What do you need help on? Cancel X
Close X Guide and Walkthrough
by Teran
Table of Contents

Guide and Walkthrough by Teran 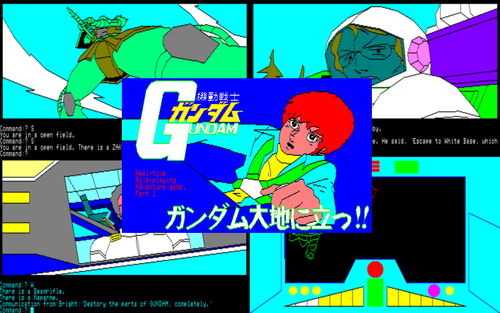 Kidou Senshi Gundam Part 1: Gundam Daishi ni Tatsu is an old Japanese adventure game published for Japanese 8-bit homecomputers. The game was only released in Japan, but unlike most other Japanese-only adventure games, the ingame text is completely in English! So there is no reason for Gundam fans to not fully enjoy this game. Well, maybe there is, because the game is very short, the text parser and accepted commands are very limited and the "Engrish" text is really bad. Many mobile suit and character names do have different spellings from their later official names. And the game can be played through in literally five minutes, with most of the time being spend watching the graphics to draw.

The game follows the first few episodes of the very first Mobile Suit Gundam series and is basically an interactive fiction game with still graphics. At the very end of the game the gameplay switches to a short and simple first-person-crosshair-shooting mode, in which you have to shoot down enemy mobile suits.

A sequel titled Kidou Senshi Gundam Part 2: Tobe Gundam was released a year later, in which the story was continued.

The game is controlled via a text parser. It is really limited, so don't expect this to be as elaborate as an Infocom parser. There is one important thing to note. You must type everything in CAPITAL LETTERS, or the parser won't understand it!

With the following step-by-step walkthrough guide you should be able to finish the game easily. If you use an emulator to play the game and the emulator does feature save states, you might want to make use of it right before the shooting sequence.

In this chapter you sit inside the Gundam and you face two Zaku mobile suits. Press 'R' to check the first page of the Gundam manual. Next press 'B' to fire the Vulcan guns. Then press 'S' to destroy the first Zaku with the Gundam's beam saber. Press 'R' again to read the second page of the manual. Finally press 'Z' to hit the cockpit of the remaining Zaku with the beam saber. Char does not seem to be amused...

The last part of the game consists of a little shooting sequence in which you have to beat Char in his red Zaku and another normal Zaku. The enemy mobile suits can't hurt you, but you must hit the red Zaku before your beam rifle runs out of energy. Before the sequence starts you are asked for a random seed number for whatever reason. Just type in any number.

The crosshair is controlled by the numeric keypad if you play on the NEC PC-88 (on the FM-7 its the cursor keys) and you shoot by pressing 'SPACE'. You only need to hit the red Zaku once, which is not really difficult. You will see a last image, thus successfully ending the game.

This FAQ may not be reproduced under any circumstances except for personal, private use. It may not be placed on any web site or otherwise distributed publicly without advance written permission. Use of this guide on any other web site or as a part of any public display is strictly prohibited, and a violation of copyright.