Traveling in the Overworld Map

Resting, traveling, and developing your kingdom all take in-game time and advance the calendar—and time is one of the most precious resources you have in the game. This walkthrough should leave you with upwards of 70+ extra days by the end, but it’s still best not to waste time.

1. Traveling on the Overworld Map

You can travel between areas on the overworld map by either clicking on the arrow in the direction you want to travel or by clicking directly on a location or cross-road. The party will attempt to go there using the most direct fully explored route. However, the route may not be the most direct route depending on which routes you’ve explored. After your party starts moving, you can stop them by hitting the “Spacebar” key, and you can resume their travel by clicking on an arrow or hitting the “Spacebar” again. 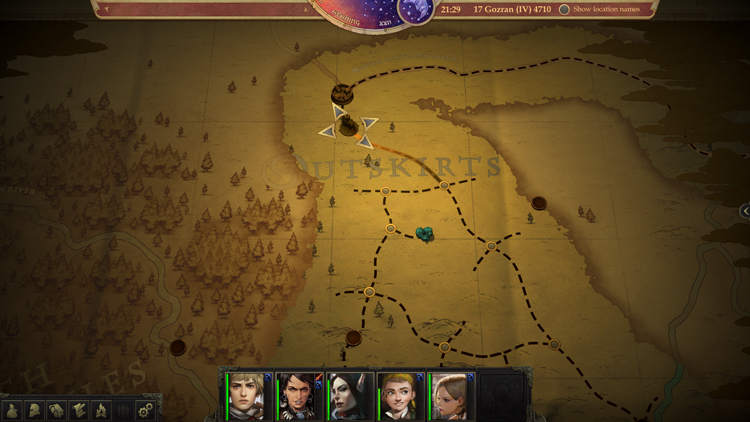 The party will reveal parts of the roads a bit of a distance from their current location as you travel. Your active party members will make a hidden Perception check as you pass by an undiscovered location, and you'll discover the location if you beat the associated DC. This means you may pass an area without discovering the location if all of the characters fail their checks. The distance at which characters can discover locations is also dependent upon their Perception. This is another reason to always have one or more characters with high Perception in your party. Hidden locations will generally be first revealed when you pass by them on the road. The party will usually not stop, and you will have to manually stop them (with the “Spacebar”) and turn around to find the actual crossroad to the location. Some areas will not be revealed and cannot be discovered until you complete story events or kingdom Projects or Events.

There is no achievement or real benefit from fully walking every path on the overworld map. If you really want to do it for completeness sake, you’ll have time to burn at the end of the game, so don’t bother going out of your way to reveal each path during the course of the game.

You will come across random events and battles as you travel the overworld map. Some of these "random" encounters are scripted and will be the first encounter you have after certain game conditions are met. I will try to point them out when they occur. Your encounter rate appears to be tied to the character with the highest stealth in your party, and you can adjust your likelihood of encountering enemies through the characters in your party and their equipment. The requirement to obtain the Achievement: Survivor is to survive 100 random attacks in the wild during one game. So make sure that none of your characters have high Stealth or unequip gear that improves Stealth while you travel if you want to increase your encounter rate to find a specific scripted event, if you want to obtain that achievement, or if you simply want the exp and rewards from having more random encounters.

The random encounters vary by region. This means that you can encounter a low-level group of bandits, goblins, or giant centipedes while traveling through the Shrike Hills as a level 18 party and that you can encounter murderously difficult foes if you wander into (or too close to) high-level areas with a low-level party. It's generally safest not to go exploring in areas where you haven't been asked to go for a quest, even if you can travel there on the map. That said, you can always save your game in a separate slot before exploring, and completing higher level areas can be high-risk/high-reward, so you should by all means go if you want to give it a shot.

You can switch characters in and out of your active party using the Group Manager button on the lower left tab. Swapping party members, however, will cause time to pass, based on how far you are from your Home Base using discovered roads. Time is one of the most valuable resources in the game, and I do not recommend using this often, if ever. 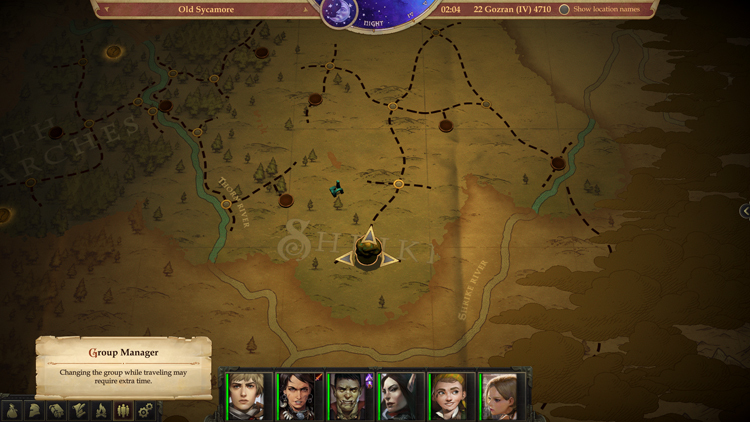 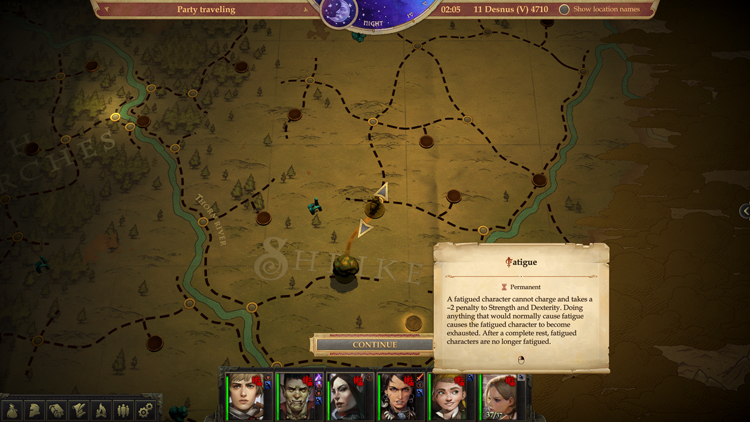 The amount of time/distance it takes for a character to become fatigued/exhausted depends on their constitution and the amount of weight they are carrying. Jaethal is undead and will not get tired/fatigued. Items that improve a character’s constitution will extend the time a character can travel before getting fatigued, and the necklace the Heart of Ira will prevent a character from becoming fatigued, period. Octavia has the lowest con of any of your companions, and it can be worth equipping her with your best con-improving belt such as the Explorer’s Belt or the Heart of Ira solely during overland travel to improve her endurance and swapping her gear back once you arrive at your destination.

You should rest when most of your characters get the blue fatigue icon in their status—unless you’re really close to a Home Base.

Each character has a carrying capacity based on their strength. This capacity is tied directly to the strength ability score (rather than the str bonus) and grows exponentially as their strength increases. Encumbrance is calculated on a per-character basis based on their equipped gear and on a per-party basis based on all of the items in your total inventory including all equipped items. 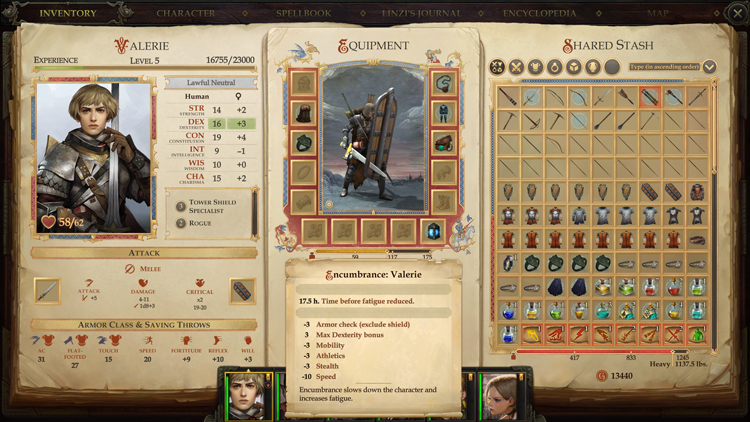 It is best to have your characters have light encumbrance is reasonably possible (which is why Leather Armor is generally better for Linzi than a Chainshirt during the early game, even if the latter has a better AC). Starting at medium encumbrance, characters will have a reduced max Dex bonus and speed and will suffer an armor check penalty on their Mobility, Athletics, and Stealth skill checks. At medium encumbrance, a character gets a max Dex bonus of 3, an armor check penalty of -3, and a 5 ft. speed reduction for small characters and 10 ft. reduction for medium characters. At heavy encumbrance, these increase to a max Dex bonus of 1 and an armor check penalty of -6, with the same speed reduction. An overloaded character has the same penalties as heavy encumbrance but can’t move. This is shown by a red weight symbol on the character portrait. If you find yourself in a position where you can’t get a character to move, it probably isn’t a bug and is probably because they’re overloaded. These penalties stack with the effects of the ability score penalties from fatigue/exhaustion, and being both fatigued and encumbered can really screw a character's ability to make any Str or Dex based skill check.

Your overland speed will depend on your party’s encumbrance. Time is one of the most valuable resources in the game, and you can easily lose a lot of time without realizing it if you travel while encumbered. Try not to travel while the party’s heavily or even moderately encumbered, as it will slow your party and make you have to rest (and hunt or use rations) more often. You can check your character and party’s encumbrance from the inventory. 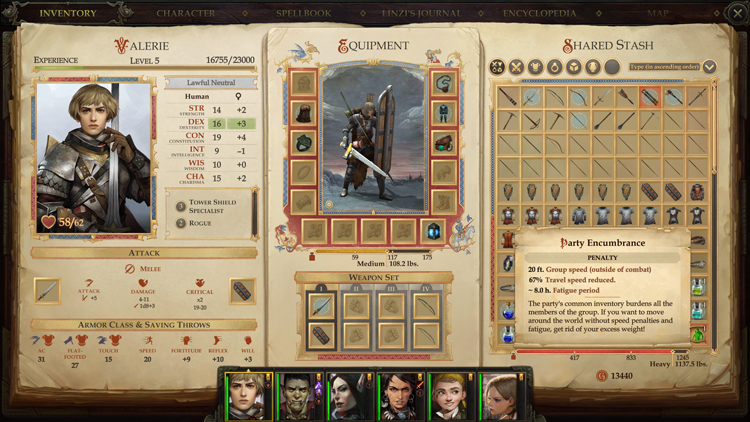 The strength penalties from fatigue/exhaustion will lower your characters’ carrying capacity and the corresponding threshold for your characters to become encumbered, both individually and as a party. Higher encumbrance, in turn, will reduce the amount of time the character can travel before becoming fatigued. This can lead to a downward spiral between fatigue and encumbrance that slows your overland speed to a crawl. The real danger of encumbrance is that you might not notice how slowly your party is moving, since the party will always move at the same visible speed on the overland map while movement speed reductions increase the rate at which the in-game calendar progresses rather than making any immediately visible change. It’s very easy to miss how quickly time passes if your party is traveling while moderately/heavily encumbered and just how much time you are losing/spending. I strongly recommend leaving yourself a weight buffer when you leave a map rather than filling your inventory to the limit, to allow for future fatigue.

You can return to almost every map in the game, and I’ll point out the maps that you cannot, so it’s generally better to leave items behind if they will encumber you and to come back later to get any that you want to sell. That said, most cheap armor (padded, leather, studded leather, hide…) and common weapons (quarterstaffs, spears, daggers) are worth so little that they’re really not worth coming back for (and hardly worth selling). As a rule of thumb, if it weighs more than its listed price in gold, it’s not worth picking up—even in the early game. I discuss this more under the Items section of this guide. If you really want to leave an area but can’t because you’re overloaded, you can generally cheat the system by casting a buff like Bull’s Strength on a party member, to get your group encumbrance down to heavy so you can leave the map. However, I generally wouldn’t recommend it, since the lost time isn’t worth it.

Bags of Holding (and similar items) will reduce your total party weight and are incredibly valuable, if a little rare. You can get three of them during the game by buying them from the following NPCs: (1) Bag of Holding, Small - buy from Oleg at Oleg’s Trading Post for 2,500 gold; (2) Bag of Holding - buy from Hassuf at the Capital Square of your kingdom’s capital for 25,000 gold; (3) Bag of Holding, Small - buy from Bartholemew Delgado at the Lone House for 2,500 gold. I recommend you buy these as soon as you can afford them. You can find the Professor's Hat at the Bridge Over the Gudrin River in the early mid-game. It will increase carrying capacity by 200 lbs. if equipped.