The “M” key will open up the area map within an area. 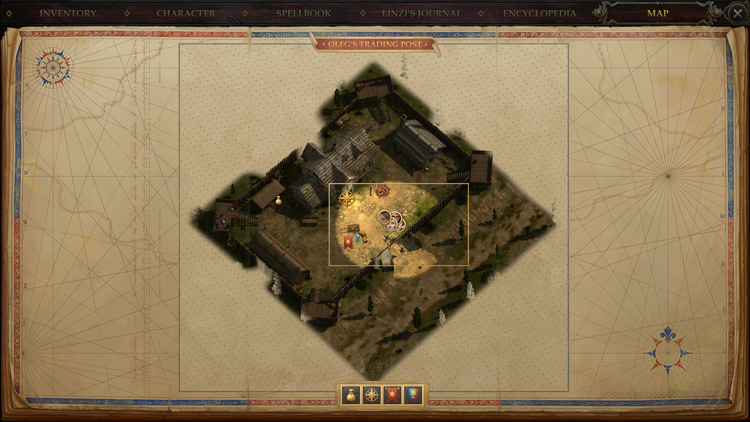 Unexplored areas of the map will not be revealed. The brighter area will show your area of light/vision. The golden rectangle is what is displayed on the screen. You can scroll the view in and out using the mouse wheel, both in the map window and in-game. Red busts are hostile NPCs, blue busts are friendly NPCs. Points of interest are marked with a red flag with a gold star. The shield icon will be placed near significant characters or objects.

The yellow loot bags are treasures that you have found but have not yet collected. You will get a chance to collect all of these en masse when you leave an area, as long as you click on them at least once.

The gold compass icon indicates exits to the current map and can represent exits to a different level of the area. They do not necessarily reflect exits to the world map. Many areas will have multiple different levels, each with their own map. I do not believe you can flip between the level maps absent mods.

You can turn off the loot icons, exits, points of interest, and significant figures/objects by left-clicking on the respective icon at the bottom of the screen.

A. Selecting and Moving Characters

Most of the game is played in the various area maps. You interact with most characters and things by left-clicking on them.

You move your characters by selecting them and left or right-clicking on the map; characters can be selected by clicking on them or on their character portraits. You can select multiple characters by holding down the left-click button on the mouse and selecting an area, by clicking on multiple portrait icons while holding the shift key, or by hitting the “Backspace” key to select the whole party. If you move by right-clicking, you can control the orientation of your party by holding down the button and positioning them with the mouse. The game will naturally snap the icon to the nearest character. Hold the “Ctrl” button to disable snapping. 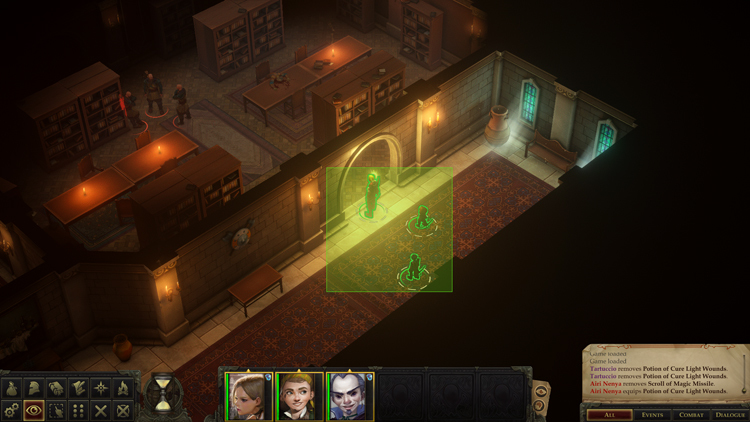 Selecting multiple characters by left-clicking and selecting an area. 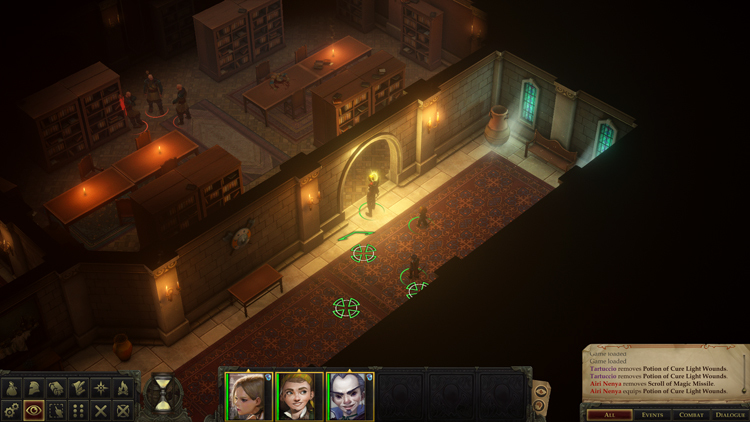 Selecting the orientation of your party by holding the right-click button and orienting the party.

A portrait for each active party member will be shown in the bottom. There are small icons on the right side of the picture that tell you what effects are on the party members. These include active spells such as Shield (Wizard/Sorcerer 1) or Bless (Cleric 1), active abilities such as Fighting Defensively or Power Attack, beneficial kingdom effects, and negative status conditions.

You should remember to look at these every now and again to make sure your characters haven’t been hit with a negative condition that you need to deal with.

The lower left corner contains buttons that can open up windows or enable various game features. 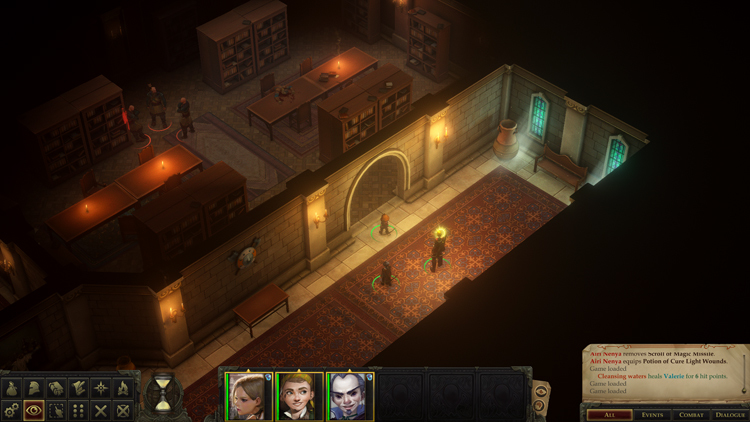 You can select the icons on the first row to open up the Inventory, Character, Spellbook, Journal, and Map windows. These can also be opened with keyboard shortcuts, and these are discussed in the Character Information section.

The icon that is on the furthest right of the top row is the Rest button. This is discussed under the Resting section.

The icons on the lower row are the Menu, Inspect, Select All Characters, Formations, Stop, and Hold buttons. 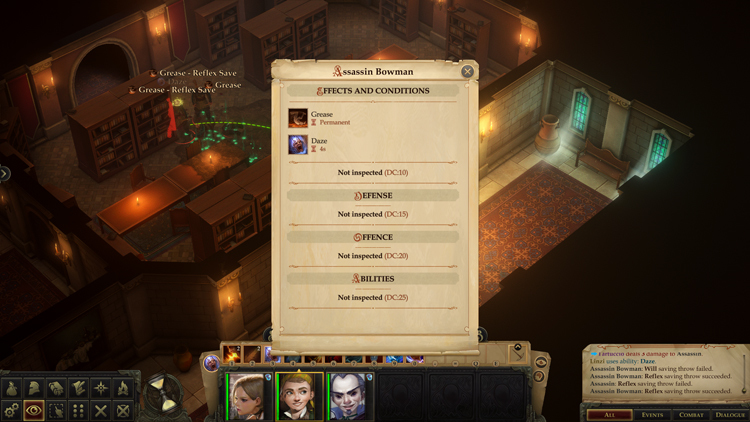 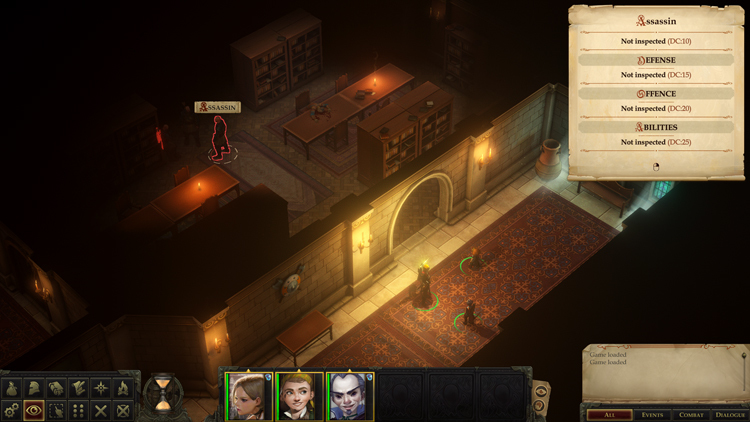 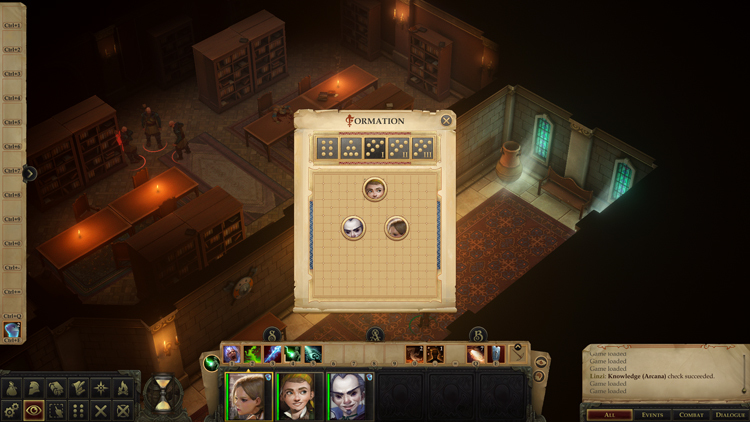 There are three sub-windows that you can open to select your character’s spells, abilities, and items.

The spellbook tab will display all of your character’s spells for that level. You can drag and drop the icon of your regularly used spells and abilities into one of the empty tabs above the character portraits or to the left of the screen for your convenience and cast the spells from there. 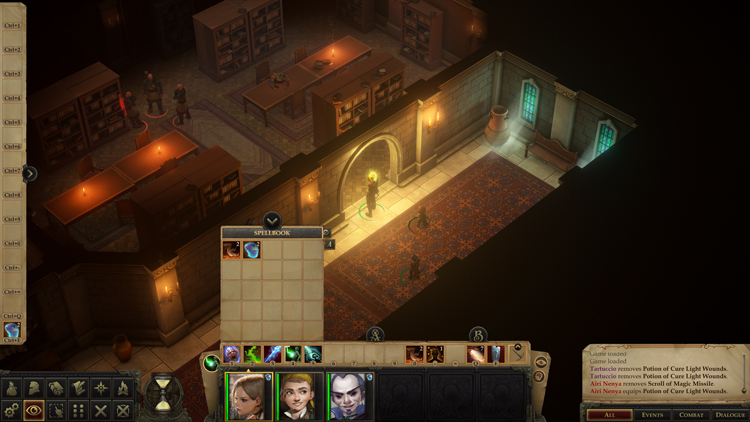 Cantrips are 0th level spells and can always be cast without using any spell slots. During the early stage of the game, Daze (0) is often Linzi’s (and other arcane spellcasters’) best option in combat, since it'll have a decent chance of negating an enemy's actions for the round. Octavia can be very effective with the Acid Splash (0) cantrip, since it involves a touch attack and lets her do sneak attack damage on any enemy being attacked by 2 or more melee characters.

You can right-click on a spell or ability icon to have it autocast in battle every round. Autocast spells will be displayed in the circle to the lower-left of the spell/ability tabs.

Certain spells can be cast in multiple different available options. For example, the Protection from Alignment (Cleric 1) spell can be cast for any of the alignments. If a spell has additional options, it will have a (^) at the top of the icon. You can click on the ^ to reveal the other options. 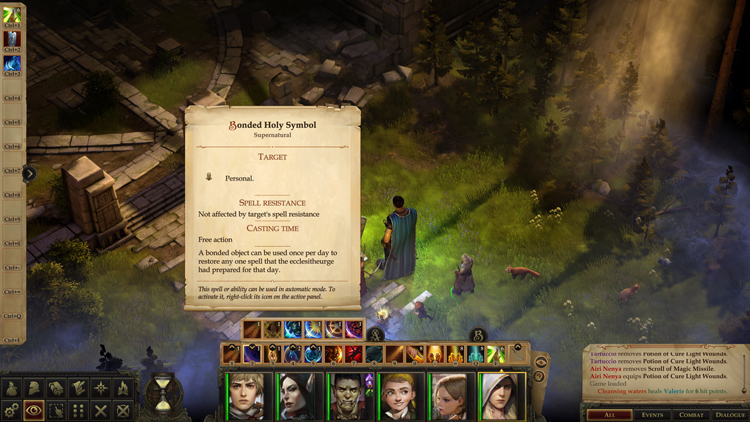 Clerics with a Bonded Holy Symbol and Wizards with an Arcane Bond Object can restore one used spell per day by selecting the symbol for the bonded object from these additional options. Clerics can also convert any of their spells to a cure or inflict spell of the same level.

The ability tab will list your different abilities. Some abilities are continuous once activated (like an Aasimar’s halo in the image below or the Fighting Defensively ability). You can activate those by left-clicking on the icon. Other abilities are active and must be clicked each time they're used (like Coup de Grace). Some equipment will give a character use of a spell or ability when equipped, such as the Blessed Signet ring, which allows use of the Bless (Cleric 1) spell 3 times/rest. These spells and abilities will appear under the ability tab rather than your spellbook, with the number in the upper right corner representing the amount of remaining uses before your next rest. 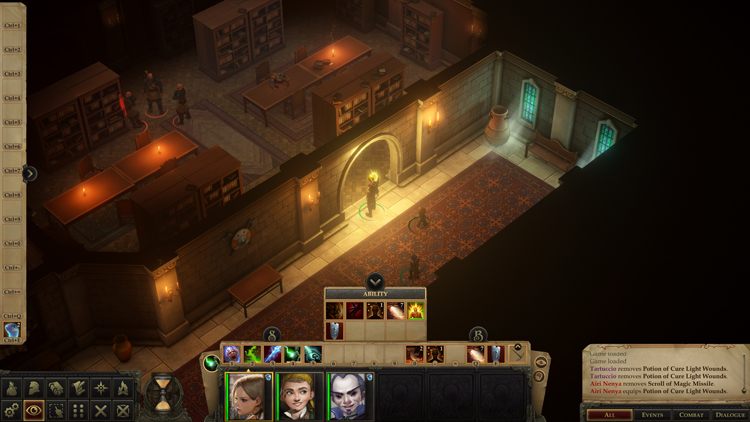 The belt tab lists the items that you put on the character’s belt. You can put scrolls, wands, potions, rods, lanterns, and pets (like Ember the red panda) in these slots. Some of these items (like Ember) must be activated under the abilities or belt tab to be used. 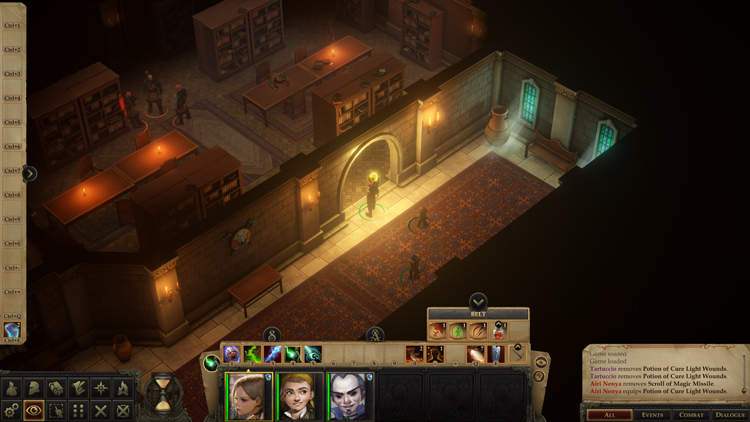