I. Return to the Capital

For some reason, it’ll always be dark/nighttime when you enter the map, even if it’s noontime. What can I say, lighting in the Stolen Lands has a dramatic flair. If you’re carrying treasure from the Goblin Fort, I recommend dumping it at the beginning of the area if it’s slowing you down. You’ll be able to sell it later, but there’s no point in carrying around dead weight in combat. 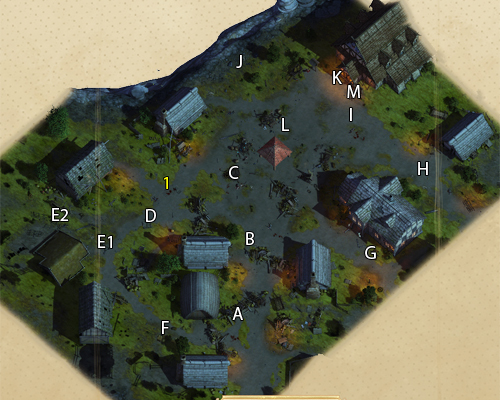 In this area, some of the NPCs will be replaced by a random Bloom Monster; these will be one of: an Owlbear (Animal 14), a Ferocious Wyvern (Dragon 7), or a Primal Manticore (Magical Beast 9). Although they’re just called Owlbears on this map, they have the same stats as the Ferocious Owlbears you previously encountered.

Many of the enemies here have the word Dweomer in their name. They have cold and electricity resistance 10 and spell resistance based on their hit die. As always, Primal monsters have a permanent Blur (2) effect.

Each dead NPC guard will carry a Longsword, Heavy Shield, and Chainmail, which can be sold for a total of 46 gold, so you could wait for all of them to get killed if you want to maximize gold generation. Personally, I like playing a Good character/ruler and try to keep as many of them alive as I can. Either way, you might as well loot all the dead guards you meet, since it’s not like you can give that gear to new guards.

If you came here immediately after the Goblin Fort, you’ll want to head to the Womb of Lamashtu next. I recommend taking Jubilost with you when you go, because there’s a minor connection to his story (it’s really minor and not in any way mandatory) and because he’s got useful abilities. If he’s not in your party at this time, you can swap him in using the Group Manager while on the world map.

If you came here after completing the Womb of Lamashtu, Hyland will open the path to the throne room after you speak with Jhod. Enter the throne room to proceed to Act 3: After the Season of the Bloom.