Combat in Pathfinder: Kingmaker is very different than in the tabletop game. While each character’s turn takes place sequentially in the tabletop game, Kingmaker runs in real-time by default, with all of the characters and enemies moving and acting at the same time (based on their initiative order). You can pause combat at any time by hitting the "Space" key. Sadly, there is no way to order a character to move to a specific spot before acting in the real-time mode—or at least none that I’m aware of. While you can change the settings to automatically pause on a regular basis, I wouldn't recommend it since it really slows down combat and gets both tedious and obnoxious.

Unlike in most tabletop game sessions, you control a party of up to six characters plus controllable animal companions rather than just one character, meaning you have a lot more to keep in mind and remember. As such, managing combat effectively in Kingmaker is less about maximizing each character’s individual actions per round and more about maximizing the party’s efficiency and having character builds that let them stay effective while largely running on autopilot. Your role should be more of the general/squad captain who decides the key spells, actions, and character positioning than a micromanager who controls every move and each attack. This will allow you to focus your attention on activating and targeting key spells, heals, and abilities, rather than trying to remember the 5-6 things you wanted to do with each character every round. You really don’t want to have to split your attention keeping track of each character—unless, of course, you’ve got the microing skills of a Korean pro-gamer god, in which case you probably don’t need this guide.

As of version 2.1.0, you can now play turn-based combat without using mods. You can switch between the two modes by hitting the "T" key or the "Ctrl" + "Space" keys together. Switching between modes will mess up the character's initiative order and is surprisingly easy to do unintentionally (given that you are likely to hold "Ctrl" for better control in spell placement and press the "Space" key to pause and unpause combat). I suggest going into the settings and disabling the "Ctrl" + "Space" combination, since it'll likely save you unintended switching.

I personally wouldn’t recommend using turn-based combat because it's still a little buggy and because Kingmaker differs from a tabletop game in terms of the focus and pacing of the game. While you will likely only have a limited number of combat encounters in any in-game “day” in a tabletop game, 80-95% of the game experience in Kingmaker is combat. One full playthrough can easily take 200-300 hours or more with real-time combat. Running turn-based combat will likely double or triple that time. This guide is written assuming you're using real-time combat, though most of the same principles apply.

Finally, playing Kingmaker (and most if not all computer versions of tabletop games) is essentially like playing a game run by a very well-prepared but uncreative and stupid DM. This isn’t a criticism of the game designers or programmers, but it’s a function of the technology and medium. There’s only so much you can do with preset encounters and a fairly straightforward enemy AI. This means that most enemies have pretty basic aggro mechanics and can be dealt with using a good tank or two and fairly basic tactics (or the right control spells), as I discuss further below. Most combat in the game won't be particularly hard once you get used to the mechanics.

Select the characters and left-click on an enemy to target that enemy. You can use a character’s spells and abilities by selecting that character and left-clicking on the spell/ability from the spellbook or ability menu. This was described in greater detail under the Movement section. You can right-click on a spell or ability to have that character use that spell/ability constantly in battle, if it is possible. 0th level spells are called cantrips and are unlimited-use. These can be especially useful in the early game.

If the character is using a melee weapon, they will approach the enemy and attack. If they are using a ranged weapon, they will stop moving and attack. If you mouseover a character, it will show who the characters are targeting and who is targeting them. Allies are shown with green lines, while enemies are shown with red. An enemy’s hp (hit points) is shown by the red bar above the icon indicating their action, on mouseover or while the game is paused. In the image below, the Boggard near Valerie has taken damage. 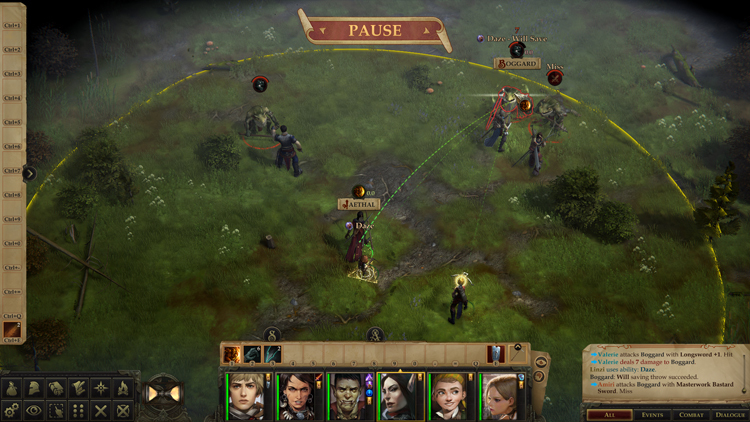 Characters will display their actions in the circle above their heads. In the image above, Jaethal has prepared the Charge ability, while Valerie, Regongar, and Amiri are in melee combat with enemies. As the Charge ability has been activated for Jaethal, the yellow circle shows the range in which she can choose a target. Linzi is in the process of using the Daze (0) cantrip against one Boggard. 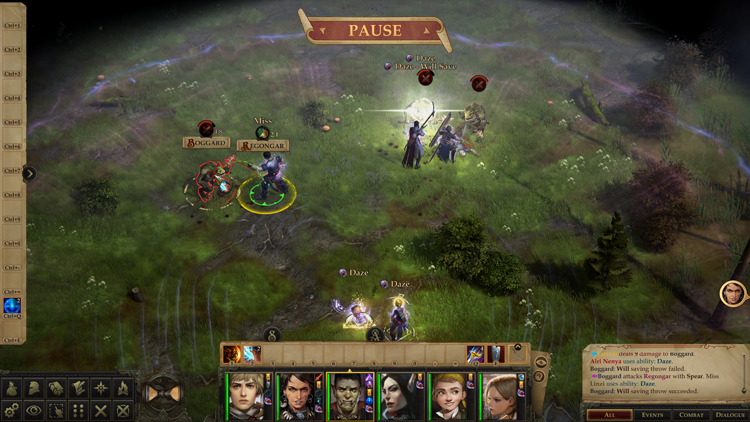 In this image, Regongar is casting a melee spell (Shocking Grasp (1)) on one Boggard, while Valerie and Jaethal are fighting two others. Both Valerie and the Boggard next to Jaethal are flanked. Linzi has used a bardsong (as shown by the purple effect) and she and the sorceress have just used Daze (0) spells. Amiri was affected by a fear effect and has run off (as is indicated by her icon on the right side.

Certain actions (such as moving away from an enemy in combat or standing up if you’re prone) trigger what’s called an “attack of opportunity” (AOO) from adjacent enemies. This means that they’ll get a free melee attack at their highest attack bonus. If you want to move a character away from a melee enemy without taking an AOO, you can use the Acrobatics ability if the character has ranks in the Mobility skill. This can be turned on from the Abilities button. Just remember to turn it off when you’re done, as it makes your character move at half speed.

The Fighting Defensively ability lets your character take a -4 penalty on attack rolls to gain a +2 dodge bonus to AC. All characters can do it, and it appears on the action bar, above, as the shield on the far right end. If you have 3 or more ranks in the Mobility skill, you gain a +3 dodge bonus instead. A number of feats can also reduce the penalty or increase the benefit from this ability.

Inspect: As discussed in the Movement section, you can activate this by either clicking on the eye in the bottom left corner or hitting the “Y” key. It will let you see useful information about an enemy on mouseover, including their AC, max hp, saving throws, and immunities. You can also open this information as a new window by right clicking on the enemy.

All characters that are trained in the relevant Knowledge or Lore skill will make a check at the beginning of combat and when an enemy is killed. You will get information depending on how successful you are at the relevant Knowledge/Lore check. This is a very handy way to determine enemy strengths and weaknesses. 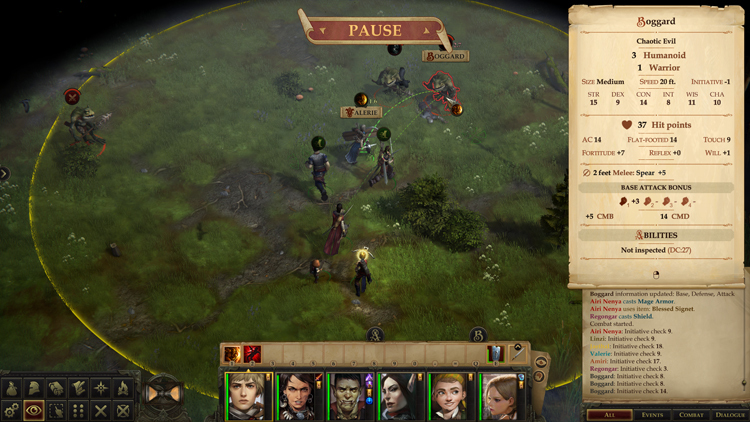 Don’t forget that you can save anytime outside of combat. There’s nothing wrong with saving often and reloading if things go bad—unless you’re playing on Last Azlanti mode, of course. 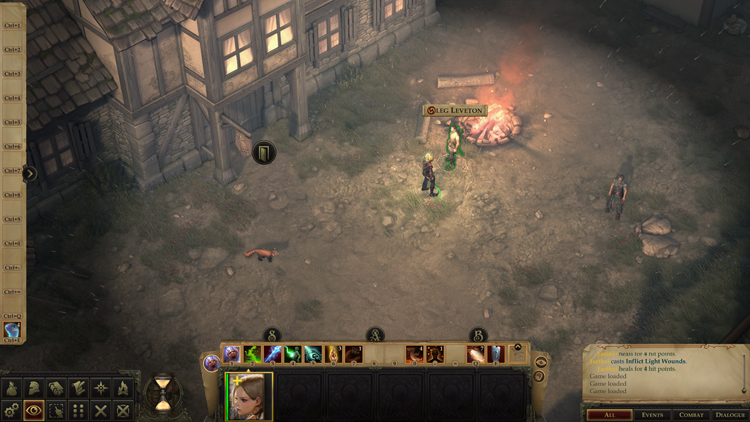 Most characters you encounter will be friendly (green outlined on mouseover) or hostile (red outlined on mouseover). You can turn many friendly creatures hostile through conversation choices (generally by attacking them). Many of your spells can and will affect friendly creatures without turning them hostile. Examples of this include Grease (Sorcerer/Wizard 1), Stinking Cloud (Sorcerer/Wizard 3), Archon’s Aura (Cleric 3).

You will encounter many named NPCs that you can spare or kill for exp and treasure. It’s up to you how you want to play the game, but there are often story benefits to not killing everyone you meet. So feel free to let them go if you want or to slaughter them if you want (and are playing a chaotic/evil character). You don’t end up at any real disadvantage if you spare NPC characters, since the loot you get from their bodies, while good when you get it, will generally be quickly outclassed. 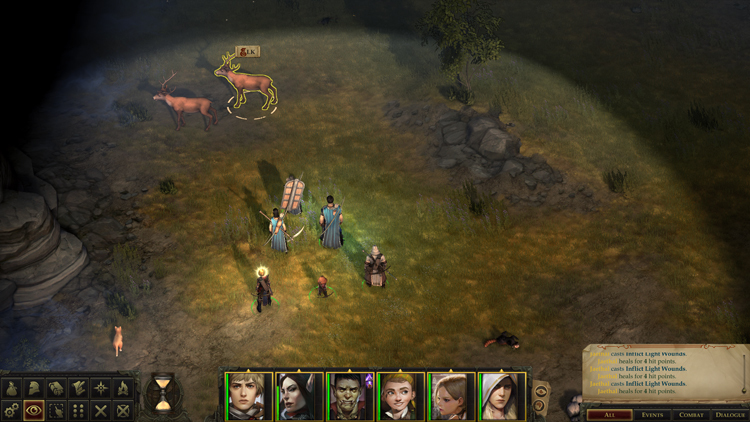 Neutral creatures (yellow outlined on mouseover) include animals like deer. Although they will not attack you on sight, they will become hostile if they are within the area of your abilities/attacks when activated. For example, if a deer walks into the area of a Grease (1) spell that was already cast, they will stay neutral, but if you cast Grease on a deer, it will turn hostile. Channel Positive Energy is an ability that will make neutral creatures hostile (even if it should heal them).

Enemies will generally go for the first character who enters their aggro zone and will generally not try to specially target your healers or spellcasters or try to escape from your crowd-control spells. Unlike a competent human DM, the game will not react to your tactics or adjust encounters to manage the challenge or interest curve. You will also generally see the enemies before you encounter them and can almost always buff before battle, get the alpha strike, and/or set up your crowd control spells to give yourself the advantage. And, of course, you can save and reload if things go bad. Also, while no competent DM in their right mind would let you use the same cheese spells and attacks to neuter 90-95% of all enemies you meet, this game will. Again, this isn’t a criticism of the designers or programmers—the game is absolutely massive and incredible for the budget and time that they had—but it means that some tactics and abilities are VERY powerful and can be used (and abused) throughout the whole game.

I will include some advice on tactics for the harder battles. These suggestions are by no means the best or only way to handle these encounters, but personally I found them effective. Since everyone will have a different main character and party composition, I’ve tried to make the advice as general as possible. That said, the suggested tactics are at least somewhat geared to the companions builds I recommend in my companion guide, and I tend to favor buffs and control spells such as Grease (1) over summons and single-target damage spells (with a few exceptions). Find whatever style works for you.