The left side of the character sheet will always show information regarding your character’s stats, AC (Armor Class), and saves. You can find out more information about each by mousing over each item. If a character is ready to level up, they will have a yellow + symbol in their character portrait at the bottom. 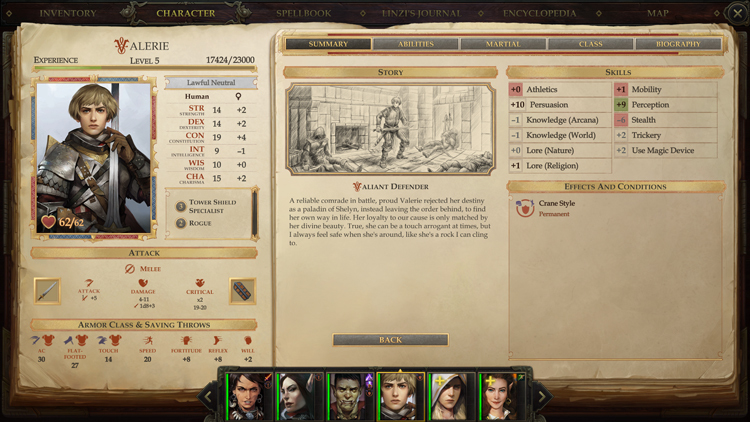 The Summary tab will display the character’s skills and a summary of their story. 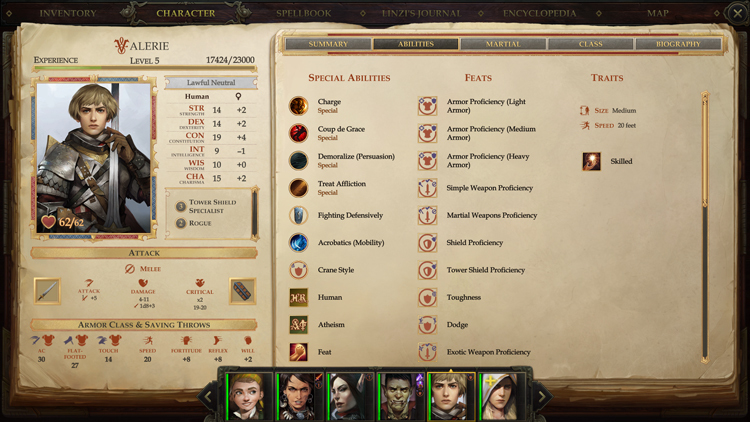 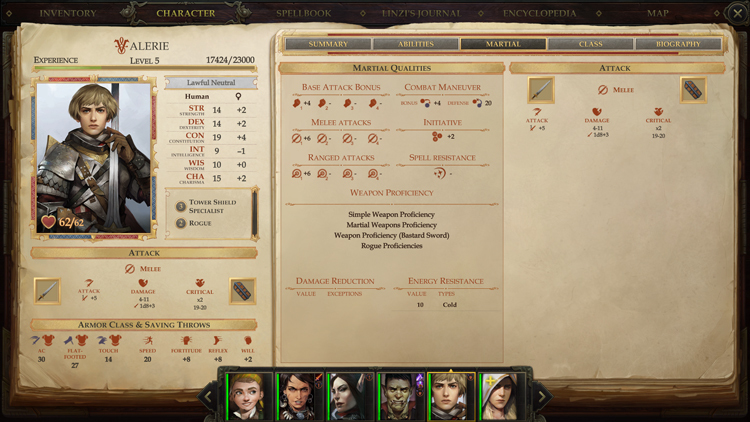 The Martial tab displays information about their combat abilities. This screen will not necessarily display all active bonuses. For example, the attack bonus will not reflect any penalties the character may take from the Fighting Defensively ability until you enter combat. The same is true for the numbers in the left pane. Some bonuses will not be reflected on this screen but will only appear in the log history in combat. 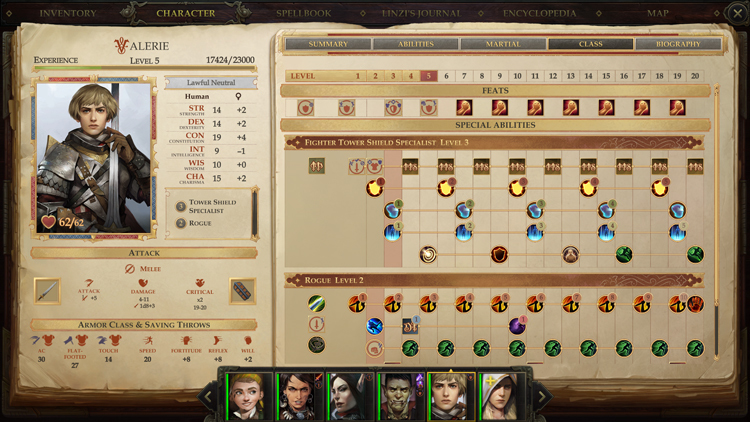 The “B” key will open up your character’s spellbook if they have spells.

Wizards, Clerics, Druids, Alchemists, and Rangers (among others) need to prepare their spells in advance, by putting the spell into an empty slot, so make sure you select/decide upon your spells before you rest and after you level your character. Sorcerers, Inquisitors, Bards, and Maguses do not prepare spells and can cast any spell they know as long as they have enough remaining spell uses of that level. Spells that you have used will be faded; unused spells will be in full color. 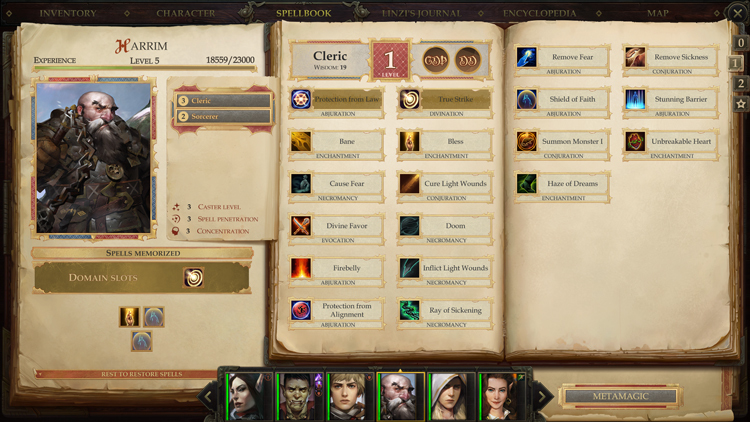 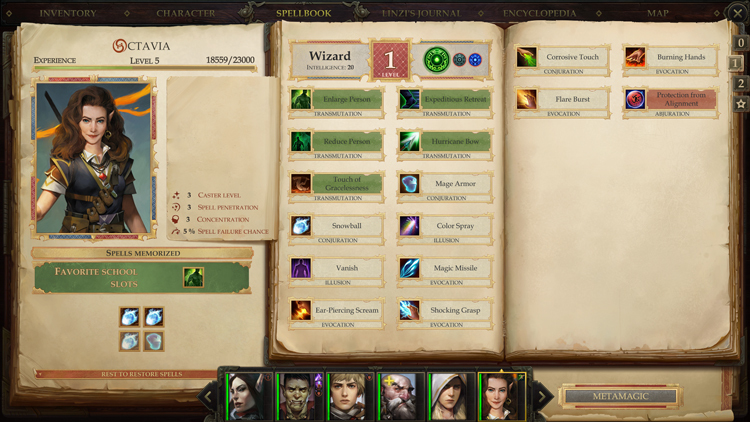 The spells with a different background at the top of each page (gold for Clerics, green for Wizards) are the character’s domain spells (for a Cleric/Paladin) or favorite school spells (for a Wizard). In some cases, the character can only memorize these spells in the specific spell slot for the domain/favorite school in question; in other cases they can be put into any spell slot. Red background spells are spells from a Wizard’s opposition school, and they take two spell slots to prepare each use.

Spells are recorded in the order in which they are learned, though a Wizard’s favorite spells are sorted to the top of the list. Unfortunately, there is no way to sort the spells in the spellbook outside of mods. 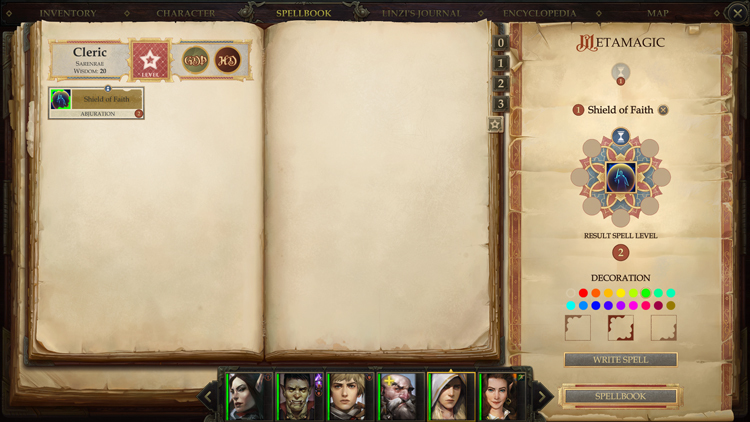 Once you learn metamagic feats, you can create metamagic versions of the spells by selecting the “Metamagic” button at the bottom right of your spellbook. You create a metamagic spell by dragging any spell of your choice into the Metamagic window and applying one of your metamagic feats to one of the eight circles surrounding the spell icon. You can add a border of your choice to the spell to distinguish it. Metamagic spells are all listed under the star page of your spellbook and at the appropriate (modified) spell level page.

Since these modified versions of the spells have their own icons, you can cast the metamagic version of the spell in the same way you cast any other spell, by placing it in the appropriate level slot (for a Cleric/Wizard) or simply selecting it in your spellbook (for a Bard/Sorcerer).

The “J” key will open up your journal. This will keep track of your Quests and Errands. 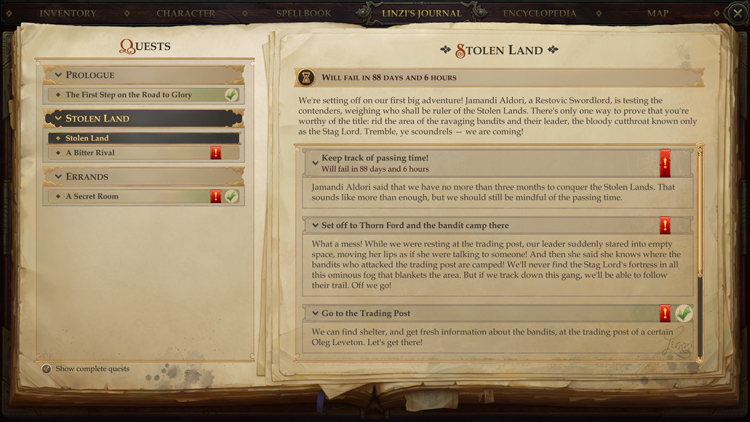 The different quests and errands will be listed here, and each entry will be updated as you progress along the quest or errand. The quests in the main storyline will be sorted by Act. I have numbered the Acts in this guide based on how they are separated under the Quests page. You can see how much time remains to complete each Act by looking at the relevant main quest. In Act 1, that is the Quest “Stolen Land”. Beginning in Act 2, the deadline is listed under the Quests “An Ancient Curse…” and “An Ancient Curse, Part X” that are listed under Kingdom Quests. However, you should note that this only indicates the maximum amount of time you have before the end of the Act. There are a lot of other quests that have unstated soft and hard deadlines, and it’s generally better to complete/make progress on the main story quests as soon as possible.