Nazrielle's apprentice Sartayne will visit you in your throne room after you recruit Nazrielle and build her workshop. He’ll tell you that one of her apprentices, Ditael, went mad after he touched the blade that was to be presented to you, and he asks you to investigate.

Travel to the Kamelands Settlement and ask Nazrielle about her missing apprentice (180 exp). She’ll tell you that her apprentice ran off and might be near the river, and she asks you to retrieve the faulty blade and to save her apprentice.

3. Bridge Over the Gudrin River

I assume you’ve already obtained all of the treasure here and handled all of the events (with the exception of the Linnorm) and I won’t repeat them on the map. They can be found at the original page. 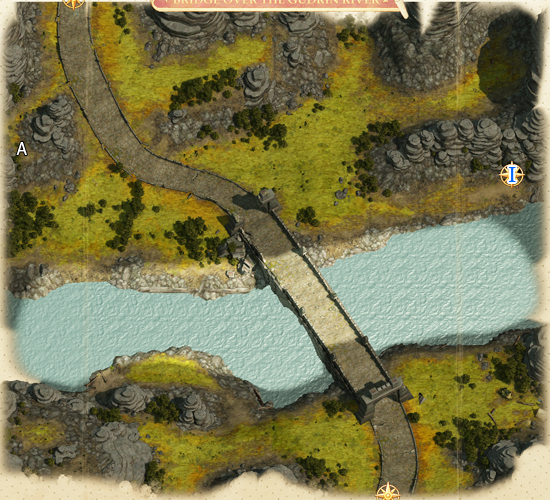 After the combat, you can speak to Ditael to find that he’s become possessive about the sword. It’s his precious. You can make a Bluff DC 30, an Intimidate DC 30, or a Diplomacy DC 30 check. Succeeding on any of those checks gets you 720 exp and advances the conversation. Failure closes off the one option you tried, meaning that you have three chances to succeed. If you succeed, he will drop Nazrielle’s Cursed Sword and run away.

If you attack and kill him, he will carry: Nazrielle’s Cursed Sword, Chainshirt +1, Ring of Protection +1, Boots of Elvenkind, and some potions.

Return the cursed sword to Nazrielle for 180 exp.

After you return the sword to Nazrielle, you will get the kingdom Problem: Accursed Things. It takes 7 days to resolve and can be handled by your High Priest. You will start to get kingdom warnings if you don’t assign an advisor to this Problem in two weeks. I don’t think it’s actually possible to fail this event as long as start this event, since the game will treat it as a success even if you roll below the listed DC or cancel it mid-way.

Speak to Nazrielle and ask her about why the items she’s been selling are cursed. Nazrielle will say that her assistant Sartayne has been spoiling her work to ruin her reputation. She asks you to find him in the capital and to kill him. You get 180 exp for this conversation.

You can find Sartayne in the eastern-most house in the Capital Square. It’s the house next to Tristian and Jhod. 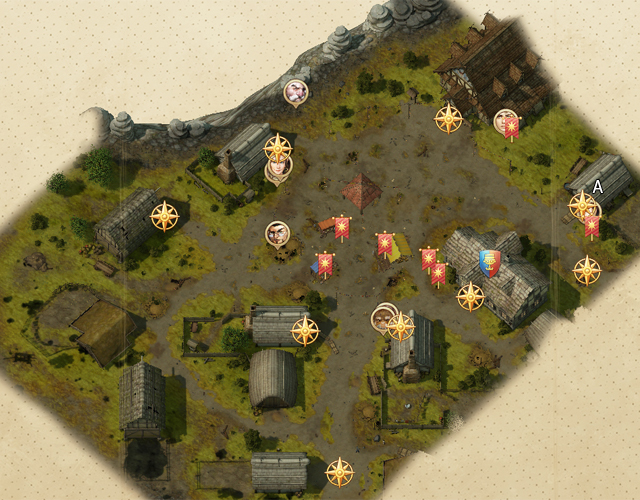 A. Sartayne. He’ll confess to spreading cursed items if you confront him and ask you to take him as a weaponsmith instead of Nazrielle. You can recognize his right to revenge but refuse to help (CN moral choice), try to jail him (LE moral choice), agree to his proposition (NE moral choice), or attack him (CE moral choice).

Sartayne (Magus 7). On Normal difficulty, he has AC 18, 52 hp, Fort +9/Ref +9/Will +9 saves, and he’s immune to sleep. He likes to cast Displacement (3) at the start of battle, which can make him harder to hit. His summoned leopards (Animal 5) have AC 17, 48 hp, Fort +8/Ref +10/Will +4. This can be a challenging fight, depending on your class, since you’ll have to solo all 3 enemies. A melee fighter should have no problems, but squishier characters like sorcerers and bards may face more trouble. I recommend buffing in advance and/or throwing down control spells like Grease (1) where Sartayne is standing, if you're using a squishy main character. This may also be a good time to use potions. Sartayne carries a Keen Scimitar +1, a Mithral Chainshirt +1, a Cloak of Resistance +2, and a Belt of Giant Strength +2.

This quest continues the game’s odd treatment of Nazrielle. It’s unclear why it’s Lawful Evil for you to try to arrest someone who’s confessed to spreading cursed items throughout your barony. I mean, sure, it might be Lawful Stupid for you to confront him alone if you're a bard, but Lawful Evil? I don’t get it.

Speak to Nazrielle again to finish the quest (780 exp).