What do you need help on? Cancel X
Next
Close X Guide and Walkthrough
by Eevee-Trainer
Table of Contents

Guide and Walkthrough by Eevee-Trainer

Hi, and welcome to my FAQ/Walkthrough for Confess My Love! Confess My Love is a free Steam title released in May 2017 - if you're curious about the game, you can download it here: http://store.steampowered.com/app/637850/Confess_My_Love/

Originally released in Chinese until its English translation, Confess My Love is a very simple game in which the protagonist, Willie, tries to confess to his love, Liza, in the five minutes before she leaves class. The game has twenty different endings, largely revolving around how the protagonist confesses, though a bit underlies the surface of this game. Personally, it's not that bad of an investment of a few hours' worth of time for a free game.

In any event, as the events in the game that lead to the endings are not entirely obvious, here's a quick guide for you. Hope you enjoy! ^.^

Game Controls & Deleting Your Save File

If for any reason you feel the need to delete your save file, just follow these directions: 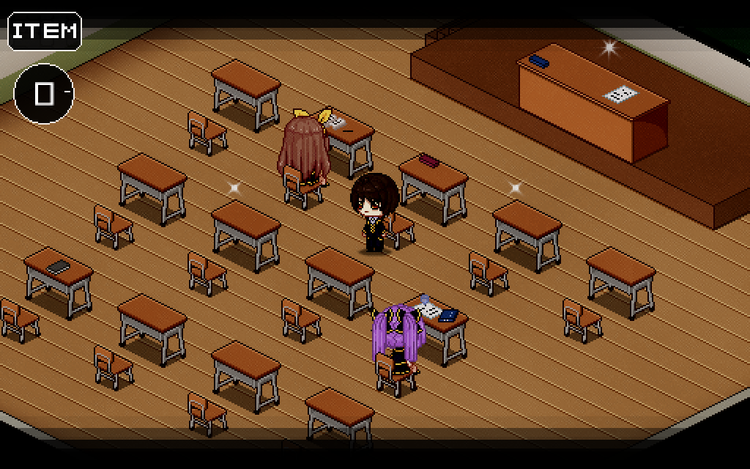 The end goal of the game is to have Willie confess his love to Liza (the brown-haired girl), which he normally will do by approaching her and talking to her. After the game's ending, you will return to the title screen, where you can play again. The game keeps track of which endings you've obtained - you can see them for yourself by looking at the bulletin board at the north side of the room, the flags representing the number of the endings you've obtained. This fact that a single ending doesn't mark the end of the game is important, as over time - as more and more endings are unlocked - new features appear in the classroom.

One of the first will be another girl in the classroom, Julie. She becomes important in Endings 10 & 11 here. While more important in later endings, the main purpose for her presence in this set of endings is just being in the classroom or not. If you want to make her leave, you can examine your desk and obtain a piece of cake; after, speak with her, ask her to leave the room, and give her the cake.

Anyhow, here's the first 11 endings. They're based solely on the timing of when you confess to Liza. In the top-left corner of the screen is a circular indicator that'll cycle through from 0 to 5. That represents how many minutes have passed since you started playing: once it hits 5, the game ends with the corresponding ending.

The remaining endings are a bit more obscure in how to obtain them.

As mentioned earlier, there is a piece of cake in Willie's desk, if you examine it. This doesn't only have to be given to Julie: you can give it to Liza, too!

From here, things get a lot more complicated. You'll need to first unlock the Nightmare Room. It can't be done until you've gotten about 11 of the endings: you'll need to be able to see four sparkles around the room, and Julie also needs to be in the classroom. Once you have that met and wish to enter the Nightmare Room, complete the following steps:

Step 1: Grab the cake from your desk

Step 2: Speak to Julie and borrow her cup

- One is at the desk behind Liza (examine it)

- One is at the bookshelf in the east corner (examine it, read the middle book)

Step 4: Fill the cup with water in the northern corner of the room.

Step 5: Examine the plant nearby and water it. Take note of the four-digit code revealed.

Step 6: One of the southwestern desks has a gray book on it. Examine it: you'll put in the four puzzle pieces. You'll also have to enter the 4 digit code from the plant.

Step 7: Go to the shelves in the eastern corner of the room and unlock the drawers for a knife.

Step 8: Now speak to Julie, and bribe her with the cake to leave.

Step 9: Close the curtains on the northwestern corner of the room.

Step 10: Confess your love to Liza.

If you complete this within 3 minutes (the clock reads 3 or less), you'll have a roughly 50-50 chance on your next playthrough of accessing the Nightmare Room. This will be noteworthy in that its music will be different. Speak to Liza for a scene: which ending you get depends on your reaction.

On the playthrough after a Nightmare Room ending, you can repeat the process as if you're obtaining Endings 16/17. The reason is to get Endings 18/19. You can switch Step 7 and Step 8 or not; either way will give you a different ending.

The 20th and final ending will be able to occur on any playthrough after obtaining the other 19 endings.

After the 20th ending, the game cannot be played further until you delete your save file.

Here's a quick list of the endings of the game, all at once, just for clarity's sake.

Here's a quick list of the game's Steam Achievements and how to obtain them. The previous sections in the guide should be sufficient for giving you what you need.