What do you need help on? Cancel X
Prev
Close X Guide and Walkthrough
by nomercyrider
Table of Contents

Guide and Walkthrough by nomercyrider

HINT: Use symmetry and a blocking beam to reach the end.

HINT: A jammer maintains its target even if an obstacle obscures its view. Bring both jammers to the puzzle entrance. Use one to jam the blue beam energy gate (closest to you) and another to jam the red beam energy gate (furthest from you). IMPORTANT: Now pick up the jammer that is disabling the closest energy gate and walk past the turrets. Once youve passed the turrets, turn around and jam this same energy gate from the other side. Both energy gates should be disabled and you will be safe from the turrets. Allowing you to retrieve the final Sigil.

If you are like me, then you are ecstatic that there aren't as many tetris puzzles this time around. However, there are still two mindbending puzzles to solve. If you are stuck, I have the solutions for you. 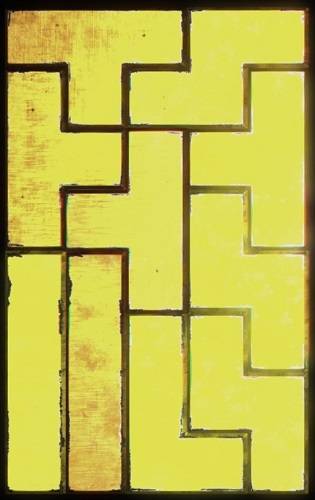 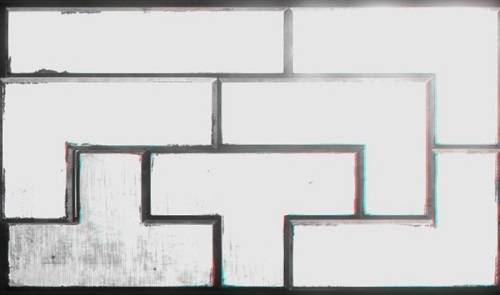 The achievements for the DLC should be unlocked automatically as you progress through the story, but here they are in case you need help.

We all love the easter eggs that Croteam sprinkles throughout their titles. Keep on reading if you want to find all of the currently known easter eggs located in the DLC.

Did you complete the Gnaar statue scavenger hunt in C1 of the base game? Well get ready for Statue Assembly v2.0! The assembly location is right behind the entry portal, on a small pedestal. The locations listed below are in the order of assembly and the description is based on which of the three courtyards the object is located.

Once you've completed the statue, you will hear the music stop, thunder roar... and then nothing else. What happened? Well, you've essentially unlocked something that will happen near the End Game. Trust me, this unlocked secret will be impossible to miss!

Bring the box from Open Field into the main hub of the level. This is done by setting it by the wall next to the puzzle entrance and use the box to hop onto the wall and into the main hub area. Once the box is in the hub, set it on the short wall to the left of the puzzle entrance to Open Field. Hop onto the wall, pick up the box behind you, and jump to the next wall. Use the box to reach the parapet and then the tower. Once in the tower, jump into the hidden courtyard to find the hidden dragon.

Solve Bunny Hop to reach the top platform. From this platform, sprint jump into the courtyard with the red and blue receivers (aim for the left pillar). Use the rock stairs to jump onto the wall to find a portal turret partially buried in the sand. Stand around and listen to several hilarious lines being delivered!

In the area between the puzzles Haircut and Cube Driver, you will see collapsed beams forming a ramp. Follow the ramp onto the top and jump to the next beam. Follow the path and jump onto the two columns, until you reach the ledge just below the large pillar. If you look carefully, you will see a blue floppy disk in the corner. Pick it up, bring it to any terminal, and load the thread to launch the game. Have fun!

In this level there are two "chains" of message bottles that contain maps/clues to the next bottle. Follow each clue to the final treasure. 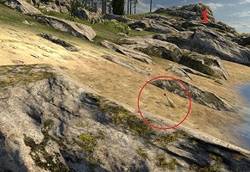 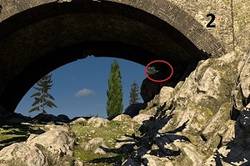 In this level there are two "chains" of message bottles that contain maps/clues to the next bottle. Follow each clue to the final treasure. 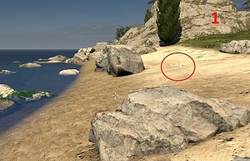 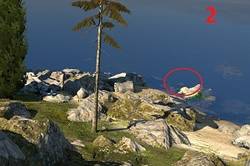 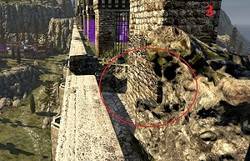 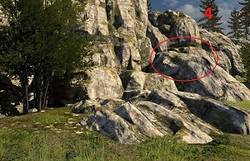 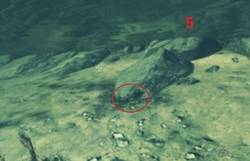 Located in Colliding Beams, head to the pool within the puzzle. Check out the gargoyles mouth to find a secret floppy disk. Boot up any terminal and load Jerusalem to start the game. There are three different stories, each with multiple branching paths. Each story has an impact on other stories and can eventually lead to all three characters reaching their goal. For example, taking the Minotaur's axe in the Artist's journey will help the Scholar cut wood to write longer.

To complete the text adventure, make the following choices during each storyling:

Located behind Colliding Beams, you will notice a floating island in the distance. If you zoom in, you will see it is full of bunnies. Head back to the main island and then jump into the fan that blows to the Colliding Beams island. If you bunny hop (perhaps this is pun intended by the developers?) as you land, you will preserve momentum and launch yourself to the bunny island. There is no way back, so you will have to reset once youve seen enough.

Just like the Goliath star, bring two boxes to the beam blocker closest to the puzzle entrance. Place one box immediately in the beam blocker's path to keep it as close to the far wall as possible. Place the second box on top of the beam blocker to create a stair step. Jump onto the wall and grab the box behind you. Follow the wall to the left until you reach an alcove. Use the box to reach the higher parapet of the wall, and then into the alcove. Use the box to reach the shingle roof and finally jump to the higher wall. Keep running past the location of the star and look for the wall at the end of the turret hallway. Use a sprint jump to leap over this wall, shouldn't give you too much difficulty at this height.

Inside the hidden courtyard you will find seven QR codes that can't be read in game. If you were to use a QR scanner, they would read: Happy, happy, boom, boom, swamp, swamp, swamp. This is a reference to the Harry Potter fanfiction, Methods of Rationality.

This requires you to have previously assembled the entire leprechaun statue in Zone 1. If you haven't yet, go do that now. Once you have freed all of the prisoners, head out to the hub world. Once you reach the center of the level, Irish music will start up and the freed prisoners will go into a hilarious River Dance routine!