What do you need help on? Cancel X
Next
Close X Guide and Walkthrough
by TheRewster
Table of Contents

Guide and Walkthrough by TheRewster 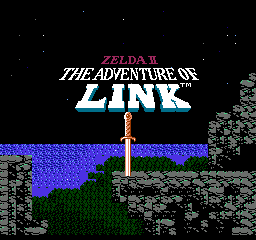 Welcome to Zelda II - The Adventure of Link! Widely considered among the most challenging entry in the Zelda series, as well as the only title that prominently features side-scrolling action, this game is very different from the rest. This guide covers the original NES version of the game released in North America, so be aware there may be regional differences.

This guide is intended to be as thorough and comprehensive as I can make it. Along the way, I'll be pointing out to you every secret that can be found in the overworld, as well as every item that can be found in each and every one of the palaces (which are this game's version of traditional Zelda dungeons). In a game as difficult as this one, it's important to acquire every single advantage you can find. So though this guide is written with the completionist in mind (as is my usual approach), it should also be useful for those just looking to clear the game regularly, as it's tough to beat without finding everything.

Before each dungeon, I'll tell you what all it's possible to have at that point in the game (after walking you through how to get everything of course), then take you room by room through the dungeons. At the end is an appendix that serves as a quick reference if you want to look up where certain things (e.g. Treasure Bags) are located, as well as some handy charts about experience points and the like. After that is a quick version of the walkthrough for those more experienced with the game who just want to know the best order for completing the adventure and have a brief list of all there is to do in the game.

Experience Points and Leveling Up

A unique feature of this game compared to the rest of the Zelda series is the leveling system for three of Link's stats: the attack power of his sword (i.e. Attack), his magic meter (i.e. Magic), and his life meter (i.e. Life). Link levels up by collecting experience points or EXP. You can acquire EXP by defeating most enemies or by obtaining Treasure Bags. The latter can be picked up from certain locations, or on rare occasions they can be dropped by defeated enemies (in which case they will contain significantly more EXP than just beating the enemy regularly).

As you progress through the game, you level up at certain EXP milestones, per the chart below:

Every time you level up, however, your EXP count resets to zero, making the next level milestone that much harder to reach. If you don't want your EXP to reset, you can choose to cancel, and thus continue acquiring EXP to reach a different milestone. (For example, if you gain 50 EXP but would rather focus on leveling up Magic or Attack instead of Life, you can cancel the Life level up--which postpones it--and keep your 50 EXP to make reaching 100 or 200 EXP more efficient.)

As you can see from the above chart, the maximum level for each of the three stats is level 8. After you've fully leveled up every stat, you'll gain an extra life each time you acquire 9000 EXP from then on. Suffice it to say then, it is absolutely worth your while to learn the game's combat and fight as many enemies as you can. See the dedicated section of the appendix for more details and charts on enemy EXP.

One final note about saving and the lives system. Unlike other Zelda titles, this game does have a lives system. You start with three lives. If your life meter runs out completely, or if you fall into a pit of water or lava, you will lose a life and start back at the beginning of the corresponding screen. You can obtain more lives (or 1-ups) by picking up Dolls that look like miniature Links (there are only six in the game though) or, much later, after you have maxed out all your stats, you get an extra life each time you accumulate 9000 EXP.

If you run out of lives, however, you get a game over. 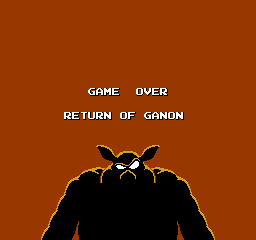 A game over does three things: First, regardless of whether you choose to continue or save, it adds a number next to the save file on the menu select screen, which can best be thought of as a "death counter." This counter is permanent until you erase the file. Second, you'll be sent back to the North Castle at the very beginning of the game no matter how far you've gotten, even if you ran out of lives against a boss deep inside a palace. (The only exception to this is if you get a game over inside the Great Palace, which is the final palace--in which case you respawn at the entrance to that palace--but only if choose continue.) So getting a game over will require an incredible amount of backtracking! Third, you lose whatever experience points you've accumulated to that point. Now if you get a game over, your progress will still be saved--you retain the same levels, spells, items, and overall game progress. But any experience points collected since the last level up will be lost and reset to 0 after a game over.

You can also save your progress at any point in the game. Pause the game on the first controller, then on a second controller, press Up on the D-pad and the A button simultaneously, which will bring up the save screen (pictured below). Unfortunately, unlike the first Legend of Zelda, saving in this game will count toward your death counter. It also functions like a game over in that you restart at the North Castle with your EXP reset. So make sure to save at your own discretion! Also, the only difference between the continue option and the save option is that continuing takes you directly back to the North Castle (or the entrance to the Great Palace if you've gotten that far), while saving takes you back to the title screen, from which you can access the file menu. (Note that if you're playing this game on the Wii U Virtual Console, you can easily sidestep these issues by creating restore points. In fact, the restore point feature will make this game much easier if you use them often! Sure, it's a cheap method, but this game sometimes has cheap difficulty, so it balances out.) 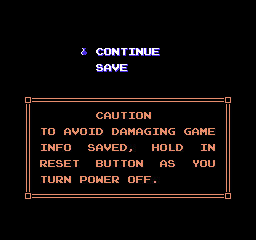 And now, with all that out of the way, let's start our adventure!