Fun, charming, and a good entry point for its genre 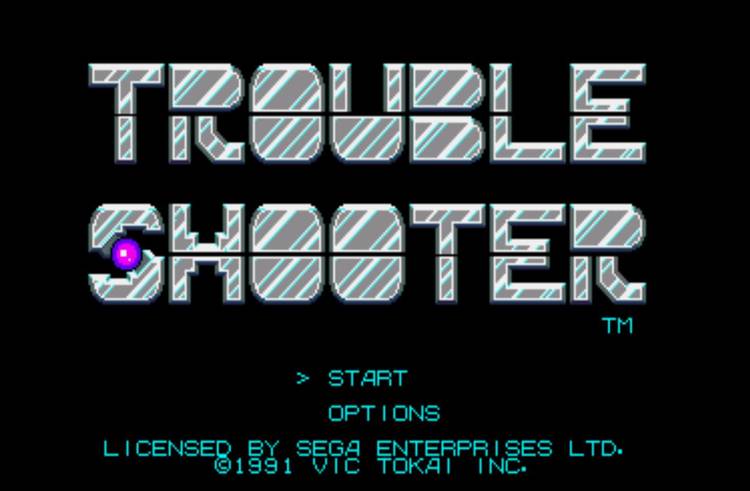 Referring to a game as a good “entry-level” title almost feels a little insulting when you consider the context that can be associated with it. It's kind of like saying “Hey, this game is good because it'll help introduce you to games that are actually worth playing”. At least, that is what people will say about these games. “Hey, don't be so harsh… it's meant as an entry level game.” The thing is entry-level titles can still be good games in their own right, and they honestly should be. Part of introducing you to a genre is showing why it's fun. That's why I shake my head when people defend games like Final Fantasy Mystic not by saying it's good, but by saying it is meant for beginners. It was still a bare-bones title, hence why it failed. In the case of Trouble Shooter, we have a title that actually is a respective entry-level type of game because it is simplistic and easy enough for newcomers, while still being fun and enjoyable. It's a very good game in its own right.

Trouble Shooter, which was actually released in North America before making its way to Japan, distinguishes itself from the main pack of shoot 'em ups at the time by being a bit of a humorous parody. Instead of being the 10,000th title that's about a space-fighter fighting aliens and federations across the galaxy, it's a title about two teenage girls who serve as mercenaries hired to save a prince. There isn't a whole of lot of a plot- this is a shoot 'em up, so no surprise there- but quick cutscenes between levels occasionally show a bit of 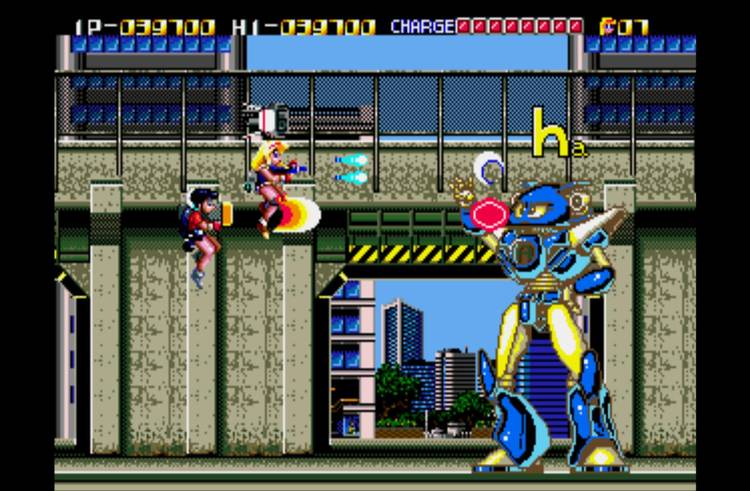 humor or self-reference. Where this game nails it with the charm, however, is its visuals and audio. Graphically the game is a colorful mish-mash where you have two teenage girls firing away at enemies in the suburbs as well as the sky. Opting to not go for the route of ominous looking bosses, a couple examples of end-level bosses are a laughing robot who waves like's there is an audience and a mech who rides on a stationary bike to generate balls that fly at you.

The best word to describe the music would be… groovy. There is a particular emphasis on drumbeats, especially the bass drum. The result is a soundtrack of tunes that, while not top-tier Genesis material, are incredibly catchy and oddly fitting for the game's brighter and more colorful atmosphere. The first level is all upbeat with what is either an electric guitar or an energetic synthesizer, but either way it's fitting and catchy. The third level mixes up a bit by presenting a rather dark and ominous track (notwithstanding the boss music), but it follows the theme of emphasized drums to stick with the game's thematic nature. The game even has some voice samples, with Madison uttering a couple words when picking up items such as “thank you” and “power up!” They are pretty garbled, but you can make them out.

The gameplay is straightforward and what is typically expected of the genre. You play as Madison and Crystal in auto-scrolling levels where you shoot everything in your path while collecting upgrades to your weapon as well as power-ups that increase or decrease your speed. Trouble Shooter does not have any different primary weapons you can collect, solely relying on powering up the one you have. It does, however, give you the option to switch Crystal between firing backwards or forwards. A semi-common ability of the genre, it's neat how the game ties this mechanic to the fact that you are controlling two characters. This feature also gives more control to the player, letting them switch between moderate firepower in two directions or focusing all of their power in front of them. This isn't a revolutionary idea, but one that plenty of other shooters without could've benefited from.

While there is only one main weapon, the game kicks up the variety with how it handles special secondary weapons. Before each level, you select from a variety of different special moves that have different ranges of attack. You can pick a lightning attack that fires multiple vertical columns back and forth, a spherical attack that has multiple projectile shoot out from you towards the edges of the screen, a wall of missiles that will project forward when you fire etc. The special abilities are all capable of utterly squashing regular enemies, but come with the caveat of a cooldown effect between usage. Its implementation is well done- an incredibly powerful attack that cannot be overused, and so should be fired wisely. Your main weapon can also be powered up to some incredible potential as well, resulting in a solid wall of destruction where you can obliterate most things in front of you.

Without a doubt what makes this game the most accessible or “noob-friendly” to beginners is its forgiving nature when it comes to getting hit. There is none of that one-hit death nonsense here, with the game instead giving you a health bar that can be replenished with health pickups. It's actually a bit funny because of you avoid taking any hits you can wind up being able to tank over 40 shots later in the game because it can just keep stacking. This doesn't make you completely safe, however, as instances where you can get crushed will result in death even if you're packing 34 health. It also does come with the caveat that you only get one life per continue. If you end up dying, you have to use a continue and 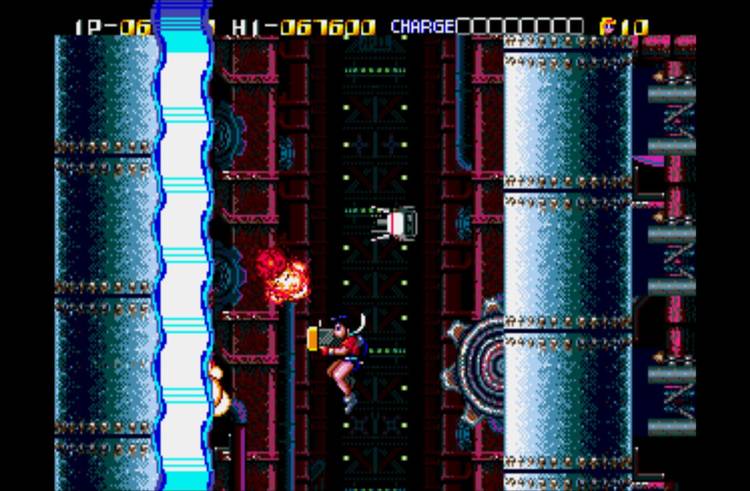 begin from the start of that level. It's a trade-off, but ultimately one that is definitely catered to the less skilled. Dying in one hit is one of the biggest things that can turn off those curious about shoot 'em ups but still a bit nervous about their famous difficulty.

That is not to say that this game offers no challenge. The second half of the game had me retrying a least a few times to get through certain sections. It's got an admirable difficulty curve, which is something not always present in these games. Shoot 'em ups sometimes throw you straight into the lion's den from the get go and have you replaying the first level over and over. With Trouble Shooter, the game starts out quite easy but gradually gets tougher and tougher as you go forward. Even when it is at its easier parts, however, the game design keeps the action up to keep you hooked. The game never puts you through major slogs or moments of boredom. If it's not the action, it's the fast-scrolling backgrounds or the music that keeps you engaged. You can also never completely shut your brain off, as you will start taking hits left and right if you just stop paying attention. Overall, the game design is rather satisfying for how “casual” it could be considered in its genre. It manages to keep things feeling a bit tense and fun throughout, never going on autopilot.

It's accurate to call Trouble Shooter an entry-level shoot 'em up, but it's better than that implies. While it's relatively easy nature and simplistic design make it enticing to beginners or simply those less skilled at the genre, it has enough of its own charm to stand out as a good title. The subtle humor and sillier nature of the game are key strengths, and the way they implemented the usage of special attacks takes it a bit beyond just shooting away at stuff. A combination of horizontal and vertical scrolling stages adds a tiny bit of variety, but most importantly the game is just very solid in design. Every level feels unique and the game never starts getting repetitive. It's fairly basic but it's just a fun and enjoyable game that isn't stressful because of a high difficulty curve. While those craving nail-biting challenge won't find what they are looking for here, this game is easy to recommend to those looking for an entry-level shooter that's still incredibly fun and brimming with personality to boot.

Gaming since the 90's. I'm a general gamer who appreciates a wide variety of genres, though I lean toward RPG's, hack n' slash games, and Japanese/anime titles.
Would you recommend this Review? Yes No
Send Skip
Message Sent