I’m a huge a huge fan of Donald Duck. So when I hear he’s in his own video game and it’s set in Duckberg where there’s a mention of Uncle Scrooge, I was sold. Well unfortunately it’s not as good as Ducktales but it has some good things going for it.

Donald finds a treasure map and he wants to be richer than Uncle Scrooge but Pete and his goons want it from him so Donald and his nephews go out on a plane to various locations to find the treasure. 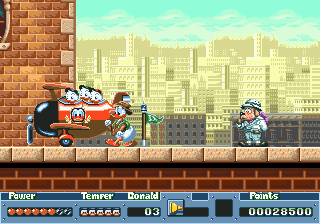 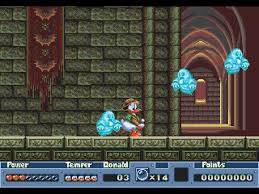 The one thing that sticks out are the graphics. Donald looks just like Donald and his animation is a lot of fun. Even some of the enemies look good too. I like the fat ghost you follow that splits into a bunch of ghosts. There’s also this tiger you fight in what looks to be Agrabah that for some reason breathes fire on you.

Donald’s main weapon is a toilet plunger. Why? It mostly just stuns enemies. He can get upgrades for it throughout the course of the game but still, why a toilet plunger? 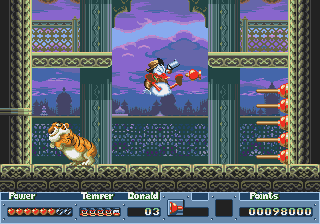 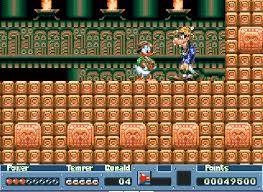 In addition to his plunger, he can also shoot out popcorn as a spread shot projectile. He can also use gum where it can clear through paths and even help find items in blocks. I’m not sure how that works but ok. Donald can also go into his signature fits and plow through enemies too.

The sound is pretty decent but don’t expect any voice from Donald in this game. Yeah I guess they didn’t bother with any voice clips with this one which is a shame because it would feel like the full cartoon experience.

My only real gripes about the game is that it can feel a bit dull at times. Things start to pick up near the end but most of the level design is straightforward and doesn’t offer much of anything new. At least the game forms more of a plot near the end. 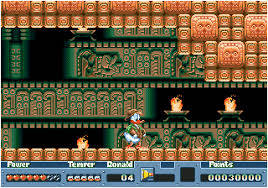 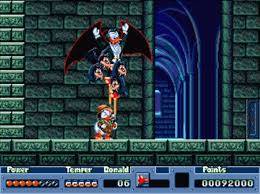 Quack Shot starring Donald Duck is a pretty good game but definitely not the caliber of other Disney licenses. I appreciate the ties with Ducktales and the old Donald Duck comics I used to read under my dad’s bed. It’s a good game with some brilliant animation. I’m still perplexed as to why his main method of attack is a toilet plunger but whatever. If that’s what floats his boat.