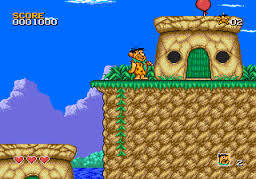 Maybe it's just me, but this game feels like nobody really cared while making it. Don't get me wrong, it's not a bad game but by this point, they seem to be running out of steam. I just found this game at a retro store not too long ago. I didn't even know this even existed and that's sad because I'm actually a fan of The Flintstones.

So what's the story in this one? Fred has to solve everyone's problems and get himself almost killed. You would think his loving wife Wilma would tell not to go out there because it's dangerous but no, she's the culprit who sends him out there. Once this game finishes and you didn't know how many stages there are, you will be shocked to see that it ended. It's not the ending that's shocking, it's the fact that hardly anything significant happens.

There are six stages and each one focuses on some problem everyone is happening. The first stage, for instance, has Wilma upset about losing her necklace. So Fred goes out out to Bedrock to retrieve it. Then the second stage Barney lost his fishing hook and since he's incompetent, Fred dives underwater where he's attacked by lava and a huge dinosaur to go get it. Then Pebbles get lost, and so Fred drives his car to go find her. I think this is the only game where Fred drives a car anywhere. You can even see his feet paddling. It just goes on like this. You would think the loss of Pebbles will shift the game into more serious problems, but then you got Betty whining that she lost her ribbon. So Wilma is ok that Fred battles on a moving train.

If you played the Super Nintendo version entitled Treasure of Sierra Madrock, then you know what to expect here. This one is only a one player and Fred does float with his feet. He still climbs up on ledges, and bats things with his club. Gazoo makes an appearance but he's only in secret places and zaps you into bonus stages. They are usually having you in the sky on these balloons trying to collect items.

The graphics are good, of course. Everything looks like the cartoon that it's based. There's even small details like the octopus underwater controlling the fans to blow you away. There's some really cool dinosaur bosses too.

Music isn't too bad. I don't think there is a Flintstones game that has bad music and this one is no exception. There really isn't anything here that stands out, per se, except The Flintstones theme. It's just not horrible and still just as fun to listen to as the other games.

Don't get me wrong, The Flintstones for the Genesis is a fun game. It combines elements from both the NES and SNES version so it's pretty solid in the gameplay department. It's just the plot, or lack thereof, is plain awful. It reminds me of Pac Man 2: The New Adventures where it's the day and the life of Fred Flintstone. It's pretty sad that the original NES game (Rescue of Dino and Hoppy) had a better plot than the ones after it. Is that really all they had? Still, it was nice to see Fred driving in his car for once. They even added the detail of his feet pattering from under it.

In closing, it's still a better game than that Flintstones movie game.

Find The Flintstones on