What do you need help on? Cancel X
Close X Guide and Walkthrough
by KeyBlade999
Table of Contents

Guide and Walkthrough by KeyBlade999

While I do write all of my guides for free, it does take a lot of time and effort to put them together. If you're feeling generous and want to show your appreciation, I am gladly accepting donations. I don't know exactly what the donations will be used for, but just know that you would definitely be helping me make more quality FAQs! Even the smallest donation amounts are appreciated, and they are a great way to say how much you appreciate the work I do. If you do decide you'd like to donate, please send the donations through PayPal at the e-mail address listed below. Thank you so very much for at least considering this!!

It's been a while since my last GameBoy FAQ, eh? My previous one was back in October for a different Japan-only game, Penta Dragon, which turned out to be an immensely lengthy mapping and FAQing project. This game is a bit different though; instead, I will be covering Block Kuzushi GB. Block Kuzushi GB is essentially a rip-off of Arkanoid and Breakout, to be honest, so it's not all that complicated. Even so, it doesn't have an FAQ for it, so I might as well get back on the ball with the FAQ CPs!

It's been nearly twenty years since this game's launch in 1995. And since then, not a single FAQ has been written for it. Well, there's always a first time for everything, no? Ever since the start of the GB FAQ Completion Project on GameFAQs several years ago - a project designed to get a guide out for every single GB game out there - many people have now been helped because older, rarer, less popular games have gotten guides.

And so, that is how I came upon this game. Thanks for listening to my ramblin'; hope you enjoy! 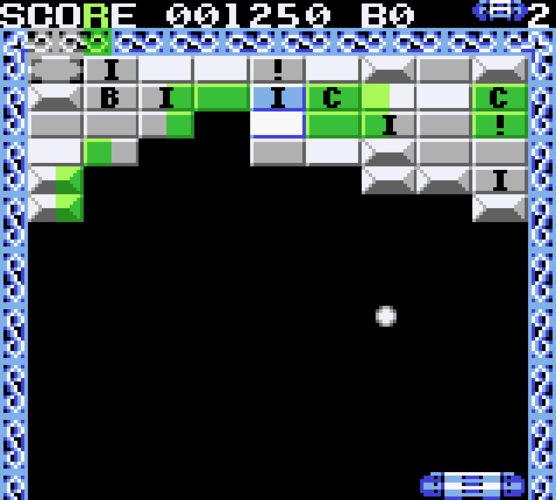 The game field. Note that my emulator failed somewhat in rendering the image, though, for whatever reason.

Playing Block Kuzushi GB is not entirely unlike playing Arkanoid or Breakout or the numerous rip-offs of those games. As you can see, the game takes place with you controlling the paddle at the bottom. Using this, you are intended to deflect the white ball that will fly around. In doing so, you will prevent it from going off-screen - which will induce a loss of life - and also force it to hit the blocks at the top of the screen. By busting blocks, you will complete levels and earn points. Some special blocks have certain functions to them, such as the lettered ones which drop power-ups. Here is a brief overview of the types of blocks.

There are various types of power-ups that the typographically-labled blocks can give you, too. Simply run into them to get 1,000 points and to earn their effects:

There's not much else to mention. Basically try to keep the ball from falling below you. 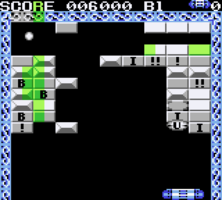 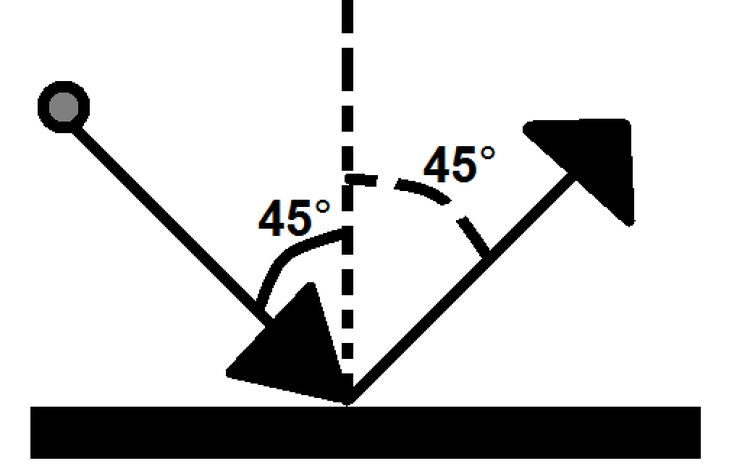 I will just say this, to clear everything up. Normal Mode gameplay is essentially the same as presented previously. The only real distinctions - indeed, the main reason I'm saying this here - is that Normal Mode provides a bit of a storyline (which is translated in the appropriate sections) and bosses with every five levels. Below, you will find details on each.

My name is Jon Takahashi. I travel all over the universe collecting prize money with my machine, the Reflector.

One day, the phone range while I was eating a late lunch. A man who called himself "Kuwar" said he wanted to ask me to do something. I couldn't see anything where he indicated this "something" should be. A little while later, for some reason, something fell from the sky. There was a giant robot head inside.

I-- It talked! I tried to hide the fact that I was upset and tried communicating with Kuwar. As I tried talking to him, Kuwar finally began talking with a sigh.

I interrupted him to try to get him to get to the point.

"Alright. Well, the short version is that my hands, feet, torso, hips, and mainspring were stolen by evildoers. I want you to bring those parts back to me."

That miserable robot head was just enough to warm my heart. I soon decided to undertake this mission.

After tracking down Nuloo, I was close to returning Kuwar's parts.

"Nulu? You! Are you Kuwar's underling? I'll shatter you and him into pieces!"

There was no point in talking. I turned the Reflector and prepared to attack.

"Nulu! Being defeated by a brat like you! But there's no way for us to lose! I won't let you escape!"

With that, Nuloo melted into water...

I tried stepping into the water, but all of a sudden a huge octupus appeared before me!

"I am Pierre! I've heared the rumors about you! Don't think you can escape! Here I come!"

I dodged his tentacle and without delaying for a moment I launched a counterattack.

After hearing this, I escaped into the water to continue searching for parts.

Somehow, I found myself lost in a cemetery. As I wandered about looking for the exit, I felt as though something was behind me.

I immediately prepared to battle.

After discovering the exit that had been hidden by Hudreau's curse, I took the Reflector and I immediately fled out from the cemetery.

As I continued looking for parts, I heard a yell from behind. A speed trap... As I clicked my tongue, I prepared the Reflector...

Without understanding these words, I prepared for battle.

After shooting Unmeau down and getting Kuwar's left foot, Unmeau's last word was "Caldera." I continued to follow this mystery.

"Caldera" was a volcanic island. I sensed something hanging in the air on this island as I started my search. But I was interrupted by a Tyrannosaurus appearing.

It seemed that this would be my enemy.

After defeating Gunther, Kuwar's hip rolled out. Why on this prehistoric island...? I continued me investigation of the island.

I found Kuwar's right foot in the roots of a large tree growing in the center of the island! I approached the root to retrieve the part...

Again, he rushed at me with his prehistoric hand.

"How regrettable! This is the island that exiles come to! I won't let you escape!"

"As long as I can get the parts, I don't need this place!"

Just as I was about to escape the island, my path was suddenly blocked by thunder falling!

"Once you step foot on this island, you cannot escape!"

I tried to stubbornly push my way through the cloud.

Having scattered the cloud, I found the remaining parts, and returned to where Kuwar was.

I arrived in front of Kuwar and spread his parts all about.

"Wonderful! You gathered all of my parts!? Well, hurry!"

Suddenly, Kuwar and the parts flew into the air! Arms, legs; one by one, the parts joined togather!

Kuwar's missile exploded! My vision was obstructed by smoke.

Kuwar flew around, looking down at me. Then I remembered about Kuwar, the most wanted man in the universe... He was worth a bounty of 10,000,000 paoh!

After the boss, the credits simply roll.

In no particular order...

This FAQ may not be reproduced under any circumstances except for personal, private use. It may not be placed on any web site or otherwise distributed publicly without advance written permission. Use of this guide on any other web site or as a part of any public display is strictly prohibited, and a violation of copyright.

If you would wish to contact me concerning this or my other FAQs, use this e-mail: keyblade999.faqs@gmail.com, or PM (Private Message) me on the GameFAQs message boards.

This is the end of KeyBlade999's Block Kuzushi GB (GB) FAQ/Walkthrough.