What do you need help on? Cancel X
Next
Close X Walkthrough
by jimfish
Table of Contents 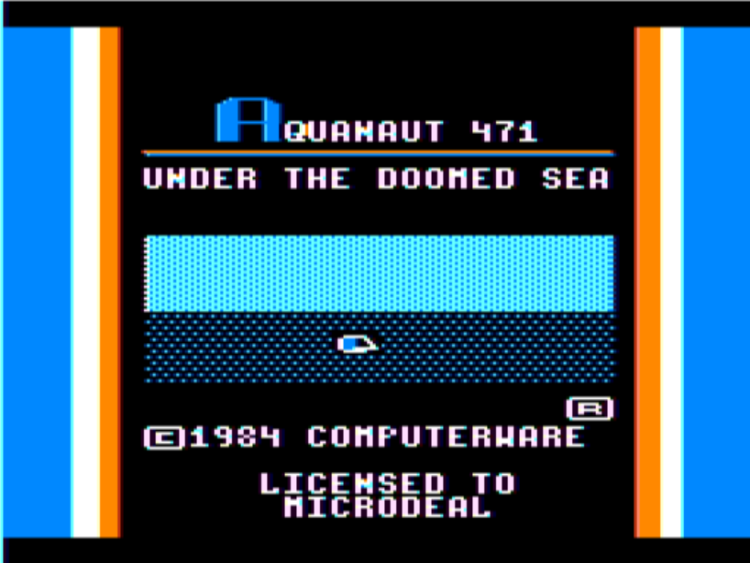 By the beginning of the 21st Century, undersea cities have become necessary to avoid the mess we made of the Earth's surface.

You will play the part of Aquanaut 471, a high ranking member of the Oceanic Federation. The O.F. is an organisation dedicated to keeping peace in the underwater world.

You begin your adventure in a submarine headed towards Trident Dome, a scientific research station.

You are going there because of a mysterious call for help. The message was from the service droid, Huey-14 and was cut off before he could tell you what the problem was.

Something is going on at Trident and it will be your job to find out what the problem is and rectify it.

Published in the UK by
Microdeal

Aquanaut 471 is the British release of Major Istar: Under the Doomed Sea, a graphical text-adventure game released in the United States two years prior for the Tandy Color-Computer. Out of the two releases of the game, Aquanaut 471 is seemingly the more commonly found on emulation websites, but other than the title change, there's no known differences between the two. Despite there being no credits, either in the game or its packaging, most sources attribute development to Computerware staffer B. J. Chambless.

Taking place beneath the surface of the ocean, you play as the titular Aquanaut 471 as they investigate a distress call from the research base Trident Dome. Entering the facility, you find it devoid of life, and must explore to uncover just what happened to the base...

Aquanaut 471 makes for an interesting companion piece to Michael Berlyn's Cyborg (1981); both games see you explore abandoned facilities in the aftermath of a disaster, both feature robot-companions that aid you in certain spots to obtain items, and both games end with you repairing vital, life-sustaining equipment that brings the facilities back on-line (a damaged spacecraft's landing computer in Cyborg, and a leaking reactor in Aquanaut 471). Along the way you can also find optional notes and letters that help fill in the backstory of what happened.

Out of the two, Cyborg is the better game. Whilst Aquanaut 471 might have graphics, Cyborg is better written and more memorable thanks to the power of imagination, whereas Aquanaut's drawn environments are rather repetitive and undetailed in comparison. They are, however, nicely coloured, thanks to the Tandy's use of composite artifact colors.

Whilst there's little to recommend about Aquanaut 471, it can stake a claim to being one of the first video games to feature an annoying side-character escort mission, thanks to the inclusion of Huey-12, your robot companion. You need Huey to help you perform a few tasks, and he'll happily follow you if you ask him. However, he has a tendency to get bored of your company, and simply stop following you at random, and you'll have to travel back to where you last saw him and ask him to follow you again. Naturally, this gets incredibly frustrating incredibly fast, especially if you happen to be in the middle of a maze and forget to keep an eye on Huey, in which case you're now doubly lost...

Aquanaut 471 is not a great game, thanks to several long maze sequences, a few intrusive mini-games that take some practise, an annoying side-character, and, ultimately, a rather lacklustre conclusion, but it's fairly short, not too taxing, and has a rather cool blue-and-orange colour palette.