Not Mario's worst game, but probably still not worth checking out 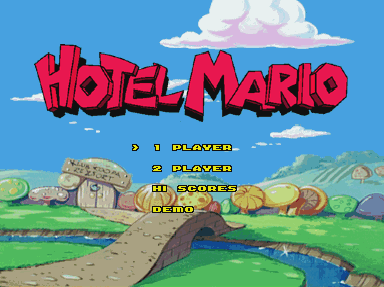 Hotel Mario is an arcade-style action game by Philips Media for their CD-I console, starring a licensed version of Nintendo's famous plumber duo. The story of how Philips got this rare opportunity to utilize Nintendo's treasured IP is one gaming's most interesting tales (which won't be told here) while the public backlash to their perceived squandering of said opportunity is equally infamous. All things considered, though they certainly could have done a lot more with the source material than a basic single-screen hop-and-bop outing, Philips didn't craft the worst Mario game of all time and there's probably an audience for this sort of thing somewhere.

Hotel Mario has Mario and Luigi again trying to rescue Princess Toadstool from Bowser and the Koopa kids, this time by navigating through a series of hotels they apparently own and operate. The premise is stupid, that much I can admit, but it's not that much of a stretch compared to Mario's Time Machine or whatever. Each level features an array of doors on different levels and enemies, some of which start on-screen and others which will appear as you navigate about. You objective is to close all the doors, for whatever reason, before a time runs out. This may require avoiding or stomping enemies, some of which will open closed doors as they spawn or pass by. Clearing all the rooms in a hotel lets you challenge a boss in a final door-closing battle with a new gimmick before moving onto the next one.

Strange premise aside, the game is at least aesthetically pleasing. While the familiar characters don't quite look right, the game is colorful and well-animated with a fitting musical backdrop for each visually and mechanically diverse stage. Lots of classic Mario characters will make an appearance (many of which you don't see too often these days) and each hotel has its own gimmick, from the flickering lights of the brick hotel to the pesky clouds of the sky hotel. It's crude and amateurish compared to the Japanese games but come on, if the goombas dressed up as Elvis impersonators don't give you a passing chuckle, man, I don't know what you're even playing old video games for! 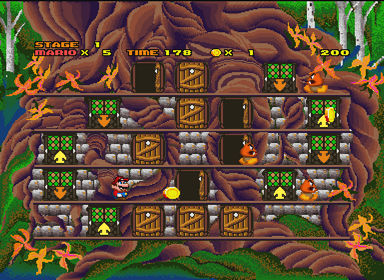 Whimsical goofiness aside, the main problems I have with the game are the erratic difficulty and awkward control scheme. Levels will either be incredibly simple i.e. pounce the enemies, close the doors, piece of cake, or ruthlessly difficult, where doors will keep opening and you run out of time, or the screen is packed with enemies and you die from navigating it. There is a puzzle aspect to this, where you have to learn how the enemies behave and perhaps leave some alive so more won't spawn in or plan your route around the floors carefully, but it seems to be as reliant on lucky circumstances than clever strategy. There are also occasional opportunities for fire flowers and invincibility among the meaningless point items that spawn around the screen and these can be a boon to a level attempt, but they're in too short supply in my opinion.

The awkward control is perhaps a more damning criticism. In order to move between floors, players will have to take elevators. This requires pressing up to enter the elevator, then down to exit. This is to allow you to wait until enemies have passed by (you can also hide in regular doors), but it makes moving unnecessarily complicated for a quicker moving game like this. It would have worked much better in a Bugs Bunny Crazy Castle kind of setup with staircases and it makes just as much sense as sky elevators or whatever. Jumping doesn't feel as good as it does in other Mario games and hit detection tends to favor your foes. Since you rarely get the opportunity for extra hit points, plan on restarting levels a lot.

The crudely animated cutscenes (with crudely delivered voice acting) that were one of the touted CD-I features are another common subject for criticism of this game, but honestly, they aren't that big of a deal. While they pale in comparison to any players that had been spoiled by the animated series (Super Mario Super Show), it's still kind of neat to see Mario and Luigi quip back and forth as they travel between hotels. They're actually kind of funny in a B-movie way, though players that find them repugnant can easily skip them too. Not sure why this is one of the main things players bring up.

Ultimately, control and demanding difficulty aside, the main problem with this game is that it just isn't that much fun. Mario evolved out of the single-screen action games nearly a decade earlier, and when he goes back (see also: Mario Clash), it just isn't nearly as entertaining anymore. Even though the game isn't great, it probably would have garnered at least a cult following of fans had it been released on the Super NES instead of the unwieldy CD-I. Most fans can continue to ignore its existence, but historically curious players might find some value in Hotel Mario.

Mario: You know what they say, all toasters toast toast.