What do you need help on? Cancel X
Next
Close X Guide and Walkthrough
by KeyBlade999
Table of Contents

Guide and Walkthrough by KeyBlade999

While I do write all of my guides for free, it does take a lot of time and effort to put them together. If you're feeling generous and want to show your appreciation, I am gladly accepting donations. I don't know exactly what the donations will be used for, but just know that you would definitely be helping me make more quality FAQs! Even the smallest donation amounts are appreciated, and they are a great way to say how much you appreciate the work I do. If you do decide you'd like to donate, please send the donations through PayPal at the e-mail address listed below. Thank you so very much for at least considering this!!

Hello, and welcome to my first 3DS FAQ in a while. This FAQ is one that's been delayed for a good while now. Back on March 20th - almost two months ago from when I began writing this - a new Pokémon game, Pokémon Battle Trozei, was released. It didn't take me long to grab this game - rather cheaply, at that! - from the 3DS eShop. After the flawed experience I felt Pokémon X/Y provided, Battle Trozei was a refreshing experience. I've never played a Pokémon puzzle game before, and the challenge this offers ... it's extreme. I've been playing Pokémon for over ten years, and have put tens of thousands of hours into it; I've FAQed many of the mainstream games, and played almost every Pokémon game released; I am essentially a veteran of the series. And yet, after all that time, and after my huge experience and enjoyment of puzzle games, Battle Trozei was extremely difficult to 100%. And even so, it has quickly become one of my favorites: it's that kind of challenge that becomes addictive over time.

In any case, I'm here to try and provide a thorough FAQ for you on this newest Pokémon game (at least until Omega Ruby and Alpha Sapphire come out). Enjoy! 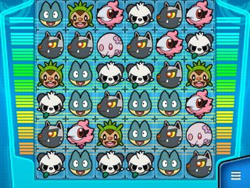 The initial premise of Pokémon Battle Trozei is rather simple: it's one of those "line-'em-up" puzzle games. This is mostly done on the Touch Screen - which will look similarly to the screenshot to the right - though referring to the top screen will be crucial, especially in later levels of the game, for your strategy. More on why that is momentarily. So, anyways, the main feature of the Touch Screen is the Trozei Box, a 6x6 grid of 36 Pokémon sprites. These will consist of certain Pokémon given to you based on the level in addition to a number of Pokémon you can bring with you before the level starts, if you so choose. The Trozei Box is lined to the left and right sides by health gauges. These health gauges deplete as the Pokémon on the top screen batter your Box, and you fail the level if they empty. 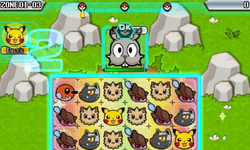 Your opponents have one other tool at their disposal. When they attack the Trozei Box, yes, they will end up damaging you. However, they will also damage the barrier - the outline around the box. This has a vital purpose for you. Should one of the Pokémon damage the barrier enough so as to break through it, they can go down into the Trozei Box itself. You will not be able to remove the Pokémon from the box short of defeating them, and they will do much more damage while in there. Additionally, they will take up space, limiting your options for matching Pokémon, and also end up destroying others. This is a huge danger to you, so be very careful.

To counter the enemies, you need to match Pokémon. To match Pokémon, you need to drag them on the Touch Screen so that they line up in rows of three, four, five, or six. The more Pokémon you line up for the first Trozei (for that is what it is called), the stronger the attack, although there are exceptions. This first Trozei will also determine the type of your attack: see, like in normal Pokémon games, every Pokémon here is given a type (although there are no longer any dual-typed Pokémon). This, in turn, affects the effectiveness of your attack: supereffective deals around double damage (i.e. Fire versus Grass), resistances halve the damage (i.e. Fire versus Water), and immunities reduce it further than resistances (i.e. Ground versus Flying).

Keep in mind that you MUST line the Pokémon up in this first and any other Trozei must be vertical or horizontal; you cannot match diagonally or in those "L" blocks or anything. If, by some chance, you happen to make two legitimate Trozeis before either is counted (there is a brief <1 second period before a Trozei is counted), then there is a slight priority system. What this does is determine which of the Trozeis will be considered for the purposes of attack damage calculation, type determination, and so on. Both Trozeis will disappear as normal, though, but they also will only add one point to the current combo. (The point of avoiding that is to be detailed later.) Generally, it works like this:

After making a Trozei, there will be a brief period of about 2 or 3 seconds in which you can make further matches. As you continue to make Trozeis, the Trozei Box will be replenished infinitely with new ones coming in from the top. If you continue making such a "combo", the damage output or effectiveness of your ability (whatever the situation may be) will increase dramatically.

There are some special instances of this. Normally, when you make a Trozei, your attack will only hit one of the enemies on the top of the screen. In the early levels where you are only opposed by a single Pokémon, that doesn't matter much. But later levels can have you fight as many as five at once, which is where the true challenge of the game comes in: you have to think quickly. This is further aided by the two special Trozeis.

Firstly, if your first Trozei was a match of five or six Pokémon, then you will execute a Scatter Attack. (Obviously, the six-Pokémon Trozei will be the stronger of the two, unless the Power of Five ability activates.) A Scatter Attack will hit ALL of the Pokémon opposing you. Clearly, this can be useful: especially if you get a long combo, you can easily wipe them out with one fell blow!

The other special Trozei is the more-often used and the easiest to abuse - it is the Trozei Chance! The Trozei Chance will occur if you make two Trozeis that occur separately, but as part of a combo, which means in quick succession. The first Trozei must contain four, five, or six Pokémon. The second Trozei must simply occur: its length does not matter, and neither do its contents. After that, "Trozei Chance!" will be displayed. This indicates things will become much easier. It begins with the fact that you only need to match two Pokémon to make a Trozei. (You can match any more than that as well, if you prefer.) This makes it much easier to maintain a huge combo, and thusly makes it easier to defeat the opposition.

When using Trozei Chance as well, you'll also see Ditto falling at random from above. These Pokémon, like you'd probably guess, have their own purpose: to provide a "wild card" Pokémon that can fill in any gap in the middle of a Trozei. Why does this matter in particular with Trozei Chances? The "infinitely replicative" nature of the Trozei Box will be nullified: you can actually run out of Pokémon in the Box. If you manage to clear out a whole box, another one will be given to you, but you will have to start up another Trozei Chance to use it again. The combo will continue nonetheless, and the attributes of the first Trozei from the first Box will be considered still should you fail to act fast enough to continue the combo.

When you end up defeating a Pokémon or swarm thereof in the midst of a level, you'll continue on to the next encounter. The number of Pokémon fought in each level will vary from 3 to a near-infinite amount in some circumstances, although the rules of combat are all the same nonetheless. That said, some Pokémon in each level will not be fought unless certain conditions are met. In any case, when you beat all of the Pokémon in the level, you will be given a rank based on your score. Your score is the sum of the damage amounts dealt to all Pokémon.

I think that's about it.

If you have anything else you think I should place here, be sure to contact me! (Just keep in mind that this is a general thing - I'll take tips for specific levels as well, but they'll be added in the pseudo-walkthroughs for those levels.)

Even though I labeled this as a walkthrough, this will not work on a step-by-step basis. The Trozei Boxes initially given are random, after all, and it only gets further random from there on. The odds of me producing an actual walkthrough that'll work for anyone on a step-by-step basis is pretty much zero. That said, this section will cover some good basic and strategic info that you can peruse at will to try and make good parties, and other good notes. For the record, if you have any level-specific tips, I'll gladly put them in! My contact info is in the Legalities section.

For each area of the game, I'll cover some basic info initially, per the below format.

Following this will be a table detailing more specific info on the Pokémon fought there.

Keep in mind that the above is just a sample table based off my memory; it is by no means meant to represent real data. It will also intend to list the Pokémon you find in the order you'll find them. In any case, it details several things. First is the Pokémon species, obviously enough. This is followed by the Pokémon's type (used in the determination of weaknesses/resistances). The following two columns are mostly useful for when you actually recruit them: their base power rating (1 to 5) and Ability, if any. Then there are the two main things of the type data. The "Weaknesses" are the types of attacks that'll do extra damage to the Pokémon, and thus the ones you should favor. Following that are the types of moves that the Pokémon is going to take a lot less damage from, analogous with the immunities in mainstream Pokémon. These are the two most important things to be aware of; while resistances are also important to some extent, it's much easier to deal with them than near-immunities. (Not to mention the table width issues that'd eventually result.)

Following that, there will be any other level-specific tips I can think or those that have been submitted. For most levels, there's not much you'll find useful, so we'll simply continue on to the next level in those cases.

That's about it. Enjoy.

As a note, Shaymin is extremely difficult to beat, perhaps the most so in the game. Even at full health, I've had it completely one-hit kill me. The key to beating him is to begin a combo as quickly as possible - get a four-Pokémon (or more) Trozei ready (have two placed near each other, and two others nearby, but not near enough for a Trozei), then quickly set up the Trozei, then the Trozei Chance, and just keep it going for as long as you can. You HAVE to beat Shaymin in a single attack, pretty much, or except a swift and sudden death.