What do you need help on? Cancel X
Next
Close X Guide and Walkthrough
by KeyBlade999 / yoshi_chao
Table of Contents

Guide and Walkthrough by KeyBlade999 / yoshi_chao 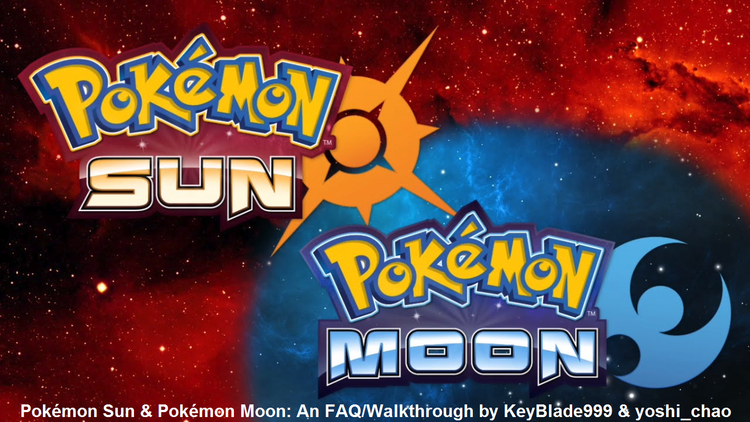 How to Use This FAQ

This is a bit of a primer on how to use this FAQ, at least on GameFAQs (where we originally posted this guide).

At the top-right of the guide, you should see a number of buttons.

Especially be sure to use the latter two to most quickly get to what piece of information you want! This guide is very large and very long, so don't inconvenience yourself by wasting tons of time searching through everything when you can just get there in a few clicks!

Further, it is also important to note that this FAQ is divided into 50-KB pages. This is not done by the choice of either author; it is simply how GameFAQs functions. If you would like to change that and display the entire guide on a single page, go down to the bottom of any page and click on "View as Single Page".

Hi, and welcome to our Sun & Moon FAQ!

Yeah, for once, I'm actually sharing the spotlight for once and coauthoring with another person, one of my best friends yoshi_chao (who declined to write her own intro). I've known her for ... quite a while now, probably for most of the entire time I've been on GameFAQs, and we met through a mutual love of Pokémon - specifically Pokémon Mystery Dungeon: Explorers of Time, Darkness, and Sky. It was probably about seven years or so ago now, really, that we first got to know each other. It's kinda weird looking back at all that time that has passed and how much things have changed in our lives...

Well, anyhow. Yoshi offered herself up as a sacrifice when I mentioned that I was looking for a coauthor for my FAQ; thanks to college keeping me busy, it's nice to have someone else to work with, so that things might actually be done in a timely manner - and who better to pick than one of your best friends, right? It doesn't hurt either that she's wanted to write her own FAQs for a while now and has made several attempts (Pokémon Platinum and Hey, You! Pikachu come to mind), though this will be her first big foray into the world of FAQing - but I've got complete faith she'll be able to step up to the task. ^_^

Anyhow, hereafter you'll find our Pokémon Sun & Moon FAQ/Walkthrough. Pokémon Omega Ruby and Alpha Sapphire - the preceding titles in the core series - truth be told have left bad tastes in both of our mouths, albeit for different reasons. Generation VI honestly is probably my least favorite of them all ... so coming into Sun & Moon, my hopes aren't exactly the highest, personally. Still... It's a Pokémon game, right? And more importantly the start of a new generation, the seventh since the series launched more than 20 years ago now. Despite everything, I'm willing to approach Sun & Moon with an open mind - it's a nice chance to clean the slate, and see how Game Freak can impress us again despite everything, and remind us why we became fans of the series in the first place.

We sincerely hope you guys enjoy this FAQ! ^_^

A Must-Read Before the Basics

When you use the Basics section, keep in mind what it entails: there is a LOT on that Table of Contents, a lot of competitively-relevant info. I mostly chose to include a few of the following sections on the Controls and Save Data for the sake of their common usage: people tend to look these things up most often for whatever reason. That aside, most of the other stuff - like how to operate menus and the like - is in the game's e-manual.

What this section does is operate on a different level. These sections will mostly analyze the game from one of three aspects: the mechanical aspect (such as the formulas for damage), the competitive aspect (playing Pokémon very well against other well-versed players), and a mixture thereof. If you do not plan on playing against other people competitively or do not plan on playing in the Battle Tree for extended periods of time, do not bother using those sections. I have gotten complaints regarding the length of the Basics section on the whole, so I feel the need for you to remember that this section is not required reading unless you want to understand various mechanical/strategic aspects of the game (or view a little trivia). If you plan to play the game only to play the game, you'll be better off consulting the e-manual than this guide for the basic info.

We do, of course, provide a walkthrough that will help walk you through the game's plot, step by step, without this mechanic info.

Note that some functions can be delegated to the Touch Screen or gyro sensors as well.

This section mostly concerns the use of the save file. As has been tradition in the Pokémon series - even to this day, for unconceivable reasons (especially when much older games allowed hundreds) - Pokémon Sun & Moon only have one save file per cartridge or eShop download. That file is saved whenever you choose to in the field, and only when you choose to (barring the end credits and a few other instances). Thus, first and foremost, the main thing is to save often: usually, every town suffices for non-post-game stuff. After all, you don't want to get stuck in a Gym battle as your 3DS/2DS hits a very low battery, and possibly dies, and you haven't saved, right...?

The main reason for this section, really, is for those buying used copies of the game, as I get a lot of questions regarding this some months after the game's release. (Yes, even though it is in the e-manual for the game. >_>) In older Pokémon games - Ruby, Sapphire, and the other GBA games going back - it would be a simple task to start a new game and save: simply save on the new file! However, some file protection has been made so that it doesn't happen as often by little kids playing games or people screwing with you or the like; Pokémon Sun & Moon are included in this.

To delete the current file (so that you may start and save a new game), hold Up, B, and X as the game starts up from the Home Menu. Directions will then appear on-screen.

As with other paired Pokémon titles, there are certain things exclusive to each version of the game. Here they are, and they are limited solely to Pokémon.

Pokémon is itself a very technical game. While we will get deeper into these technicalities in other sections of this conglomerate of "basics" and in the various appendices, it would be first be most prudent to give you, the readers, a quick list of what will be referred to throughout the guide. Those familiar with the competitive scene of Pokémon need no real introduction to most of these terms, and most having played Pokémon in general will only need to give this a quick glance at times; however, everyone else should give this section at least a decent read-over, especially those of you who are new to Pokémon. There are several definitions here some of you may find surprising and in themselves immensely helpful to understanding Pokémon in general, and by far much more in-depth than what the game will likely ever yield unto you. >_>

In any case, if you think something else should be added here, feel free to e-mail me.

The Distinction Between "Legal" and "Legit"

When speaking on forums and the like, be sure to take notice of the distinctions between a legal Pokémon and a legit one. Functionally, there is no difference, but, particularly when legitimacy checkers are involved (online gameplay or the VGCs, for example), it is VERY important.

In other words, all legit Pokémon are legal, but not all legal Pokémon are legit. The key point is whether the Pokémon was hacked. If, on a forum, you want an idealized Pokémon, "legal" is the better term to use as you're relatively more likely to obtain a hacked one that has perfect IVs/EVs/Nature, but do this only if you don't plan on playing in areas with legitimacy checkers. If you're of the latter group, it's better to do all of the breeding and training yourself, and only trading to find specific legit Pokémon that you can not get yourself (i.e. Event legends).